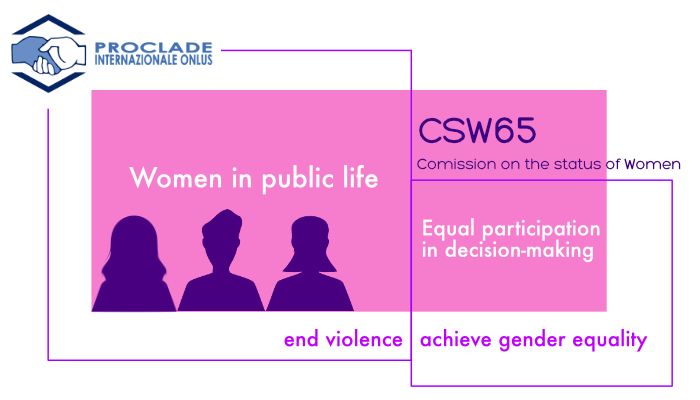 From March 15 to 26, representatives of UN member states, UN entities and non-governmental organizations (NGOs) accredited to the Economic and Social Council (ECOSOC) attended this session which, due to the COVID19 pandemic, was held virtually. The priority theme of this year’s session was “women’s full and effective participation and decision-making in public life, as well as the elimination of violence, to achieve gender equality and the empowerment of all women and girls.” This year’s session also assessed and discussed the conclusions of the 60th session (2016), “Women’s empowerment and its link to sustainable development”.

The online format allowed many people to participate. In addition to the official sessions, there were hundreds of side events organized by civil society organizations. The CSW65 Virtual NGO Platform hosted 25,000 voices organizing and participating in these events.

Proclade Internazionale also submitted a joint statement with the Justice Coalition of Religious (JCoR) for CSW65. For those who were part of the Proclade delegation – their first participation in an event of this magnitude- it was an important opportunity to learn about the situation of women in the world, as well as to learn about the variety of work experiences in different countries and regions.

Summarizing their participation in this session of the CSW65, the delegation expressed their gratitude for this “space that allowed us to listen to diverse positions, even those with which we disagree”. It also allowed them to hear “the voices of women, adolescents and girls whose rights have been undermined and to recognize that, during the current pandemic, violence in its multiple facets has increased exponentially, not only in impoverished countries but also in those considered developed”. “It was an opportunity to join different groups and networks working in defense of women’s dignity,” they concluded.