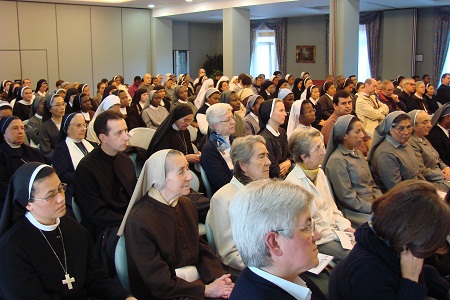 Rome. The academic year for 2011-2012 was inaugurated on October 21st at the Theological Institute for Religious Life “Claretianum”. The opening was presided over by Bishop Enrico Dal Covolo, SDB, Supreme Rector of the Lateran Pontifical University, and by Fr. Josep Ma. Abella, CMF, Superior General of the Congregation and Moderator General of the Institute..

On this occasion, Fr. Matías Augé, CMF was honored for his 75 years of life and 40 years in the leadership of the Institute being one of its founders. This homage was conducted by the current Director of the “Claretianum” Fr. Josu Alday, CMF.

After a reading of the academic “Report” of the previous year made by Fr. George Lanithottam, CMF, the inaugural speech was presented by Prof. Manlio Sodi, SDB entitled: “To live the liturgy as religious”.

At one of the breaks, the event was enlivened by the musical talent of the young Stefano Manna who, on the violin, interpreted various works by Bach and Paganni.

The large attendance by the students and professors of the Institute, as well as by various Claretians and other religious men and women, was concluded with a sharing of light hors d’oeuvres and refreshments and best wishes for the new academic year now begun. (Photos)