In 1936, there were four Claretian communities of the province of Cataluna in the region of Valencia: Valencia, El Graó, Xátiva and Requena. On March 24, the Revolution blew the locks off every convent and cloister in Requena. The five Claretians who were living there fled. El Graó and Játiva soon suffered the same fate. By July 19, the small community of Valencia made up of Fr’s. Marceliano Alonso, the Superior, Luís Francés and Br. Félix Aguado, was the last remaining Claretian community in the region. Fr. José Ignacio Gordón and Br. Santiago Vélez, from Xátiva, and Fr. Tomás Galipienzo from Requena sought refuge there. Br. Aguado would be the lone survivor. On July 27, Fr. Francés and Br. Vélez fled to Serra, a secluded quiet place where safety seemed guaranteed. 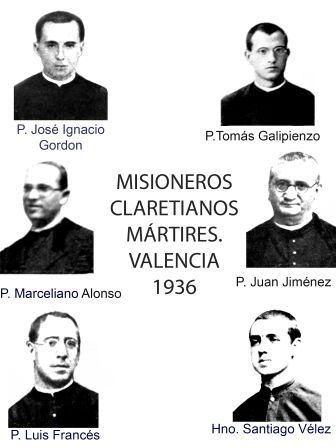 Br. Vélez, who moved on to Santa Coloma de Gramanet in Barcelona, where he had family, was arrested and executed on August 15, the feast of the Assumption of the Virgin Mary.

Fr. Francés, known for his piety, passed his days praying the Divine Office and the fifteen decades of the Rosary, and at times following the Stations of the Cross on the outskirts of the village. He carved in a stone: “As for me, I do not boast except in the cross of our Lord Jesus Christ” (cf. CC 44). Francés was executed in Olacau on August 21, after being found hiding in Cartuja de Porta Coeli. He asked God’s forgiveness for those who took his life without knowing what they were doing.

Meanwhile, unable to find better shelter, Frs. Alonso, Gordón and Galipienzo, stayed in Valencia. Alonso knew a man, who worked for the electric company. He and Gordón went to the man’s office, but unfortunately someone suspected they were religious and called the authorities. A few minutes later, members of the militia showed up and arrested them. Galipienzo was also arrested. (It pained him that he was unable to retrieve the Blessed Sacrament, which was hidden in some papers.) The three priests were subjected to a lengthy, vehement, and even violent interrogation.

Fr. Gordón was accused of using cassocks at the school in Xátiva to torment the children. “That’s a lie!” Gordón shouted, pounding on the table. “That is calumny. You can ask them…” Returning to his companions, he said with a tight smile, “Soon we will join the chorus of martyrs.”

The next one in line was Alonso, whose hearing was briefer and met with less violence. He left the room convinced he would be martyred. Fr. Galipienzo was the last, and his hearing the briefest.

Around 10:00pm, the three were sentenced to death. The three confessed their sins. At midnight, they were taken from the prison to a car. Five armed men carrying pistols along with a machine gun and portable electric lamps. The car headed toward Palmaret and Alborada. On a bluff overlooking the sea the car stopped. The three priests embraced tightly.

Before dying, Fr. Alonso entrusted himself to the Virgin, saying, “My Sweet Mother, have mercy on me;” while Fr. Gordon told his executioners, “I forgive you from my heart;” and Fr. Galipienzo found strength in a prayer he learned in the lap of his mother “Jesus, Joseph and Mary, assist me in my last agony.” Gordón exclaimed, “Jesus, into your hands I commend my spirit.”

A voice ordered them to walk, but they had hardly taken a step before a volley of shots killed Alonso and Gordón.

Galipienzo dropped to the ground unhurt, and under cover of darkness cautiously slid through the grass, crawling about twenty meters, hid among cane stocks, then a cornfield, before sliding into a small ditch. The murderers with their lamps trudged through the bushes, seething blasphemies and threats. Stopping just a few steps from Galipienzo, they stopped, turned off their lights, listened for the softest sound, then left.

At dusk on Sunday, August l6, Galipienzo arrived in Valencia perfectly disguised as a vigorous fisherman from the mud flats, in shirtsleeves and short pants, carrying a walking stick and a wooden box on his shoulders. He found the house of family friends. Imagine! It was August 1936, and the words, “Hail, Mary Most Pure” remained over the door. He was fed and hidden for the night in the haystack.

On the evening of August 18, however, Galipienzo was recognized and arrested. On September 1, he and nine others were executed at Paterna, a few kilometers from Valencia.