When her father was hired as manager of a silver refinery in the mountain town of Quives, Isabel and her brothers, despite her resistance, went to live there. In 1597, she was confirmed in Quives by Saint Archbishop Toribio Alonso de Mogrovejo..

At the time, Lima and its environs were in a state of religious ferment. Claims of miraculous cures and all kinds of wonders abounded among devout Catholics. Rosa, in particular, was inspired by the example of the Dominican St. Catherine of Siena, and in 1606 took the name Rose of St. Mary and began to wear the white third order habit of the Order of Preachers.

In 1615, her brother Hernando built a hermitage in the garden of her parents’ home. In a space of just over two square meters Rose spent the bulk of her time in prayer and penance, although she went out frequently to care for the poor of Lima.

In March 1617, in the church of St. Dominic, Rose celebrated her mystical marriage with Christ. 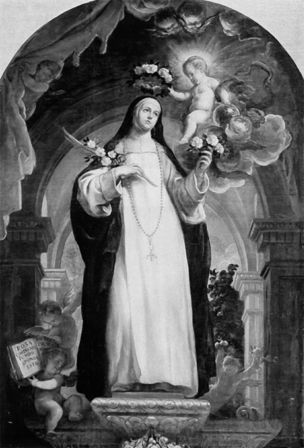 Rose spent her last years in the house of her benefactor and confidant Gonzalo de la Maza. Around her deathbed were Maza, his wife, their two daughters, and Louise Daza, one of Rose’s closest adherents, whom Rose asked to lead a hymn accompanied by guitar. Rose died of a severe stroke early in the morning of August 24, 1617.

With the backing of Bartholomew Lobo Guerrero, Archbishop of Lima, the process of beatification began almost immediately. Rose was canonized by Pope Clement X in 1671, and stands out as the first American saint, patroness of Lima, the Americas, the Philippines and East Indies.

Claret writes in his Autobiography: “If I was moved by the example of male saints, as I have said in the preceding chapter, I was moved still more by the example of female saints. How deeply they impressed me! If a woman has such feelings and desires and does so much to save souls, what ought I, a priest, however unworthy, be doing” (cf. Aut 234)

He is taken by this reversal of roles. “One of her confessors had offered himself to go to the missions, but was afraid of the dangers of the voyage. He consulted the saint and she told him: ‘Go, my dear father, and don’t be afraid. Go, convert the infidel. Consider that the greatest service men can render God is the conversion of souls, and this is the proper work of the apostles”(Aut 239).

Claret went on to observe: “She used to persuade all the friars of St. Dominic to busy themselves with this apostolic ministry, telling them that it was no less important to the spirit of their profession than the study of theology – indeed, that this ministry was the goal of all their theological studies.

Claret recounts an episode, indicating Rose had no qualms about correcting a male preacher. “She was deeply troubled at the thought of preachers who did not seek the good of souls in their sermons. Once a Dominican friar of the monastery of the Rosary was preaching in Lima to great applause because of his florid style. One day the saint told him with great modesty but forcefully: ‘My father, see how God has made you his preacher to convert souls, not to waste your talents on these useless flowers. You are a fisher of men: cast your net so as to catch men, not the air and vanity of applause. And remember, God will hold you accountable for so exalted a ministry” (cf. Aut 241).

Finally, Claret points out: “Even if she could not preach, she took every opportunity in conversation to use the eloquence God gave her to draw others to love virtue and hate vice” (Aut 241).