On December 23, we remember the birth of Anthony Claret. The Lord has given us so many gifts, above all, the communion with Claret’s evangelizing spirit, for he was born to evangelize.

Anthony Claret was born in Sallent, Barcelona, Spain, on December 23, 1807. This date is believed by common opinion to be the day of his birth because the Founder does not indicate the exact day, nor is it possible to verify this in another way. 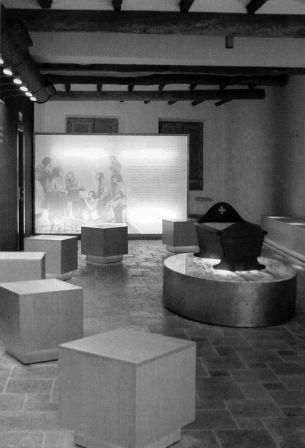 After a happy and pious childhood, Anthony worked in the small fabrics and yarns factory of his father, before moving to the Catalan capital as a student who dreamed of definitively working in the textile industry. We know his subsequent steps. His life moved in another direction. God crossed his path and called him to be a missionary. To remember his birth today, we are interested in highlighting the family atmosphere which forged his apostolic vocation.

The spiritual atmosphere which touched his childhood and adolescence was ideal for that time and context. His home constituted a truly educational setting where he was nurtured in the learning of authentic human and Christian values. This environment gave root to good practices that emerged early in him and the inclination to piety.

To commemorate this day, we give thanks to God for the gift of his missionary life, which was initiated in Sallent, next to the river Llobregat. This call would lead him to the sea of all continents for the good of the universal Church.

Why do we remember the birthday of our Founder?

It is to give thanks to God for everything. But the date of a birth of a person is an important occasion of thanks to the one who knows every human life from beginning to end. Claret was given a mission for God’s plan of salvation by being called at this particular time to share his life.

If a person is or has been distinguished in a virtue, science, art, or by any other aspect that makes him worthy of appreciation and recognition of others; then more reason for the anniversary of his birth is remembered and celebrated.

The birth of St Anthony Mary Claret is, therefore, also a reason to give thanks to God. We thank God for his life, his missionary holiness and charism. We give thanks for the foundation of our Institute and in many other ways he gave us the Lord and for those who have inherited his spirit.

The liturgy for celebrating dies natalis.

The liturgy does not usually focus on celebrating the birth of the saints. Of course we celebrate the birth of Jesus Christ and Mary his Mother. There is also one for the dates of the Incarnation of the Lord (March 25), the birth (December 25) and those of his death and glorification (the Passion, Resurrection and Ascension); of Mary, we celebrate her Immaculate Conception (December 8), her birth (September 8) and her passing to the glory of the Assumption (August 15).

As a general rule, we don’t celebrate the birthday, except in the case of St John the Baptist, his Martyrdom (August 29) and also his birth (June 24). What is celebrated, in contrast, is the day of his death which is called dies natalis, this is the day of his birth in heaven.

For St. Anthony Claret, we remember his birthday as well as the day he died (October 24).

The signs of identity of Anthony Claret

We can say that Father Claret was a man born to evangelize as it was stated in the motto of the Bicentennial celebrations held in the Congregation in the years 2007-2008. Let us recall the fundamental data and identity of our Founder: his name, date of birth, the place where he was born and his family.

The Saint says with regard to his name: “My name is Anthony Mary Adjutor John Claret y Clará,” (Aut 5). He gives the reason for these names with which he was baptized; all linked strictly to family. Mary was added subsequently, on the occasion of his Episcopal consecration, because of his devotion to the Virgin for she was “his my mother, patroness, mistress, teacher and my all after Jesus” (cf. Aut 5).

Anthony Claret was born on December 23, 1807, and was baptized on Christmas Day December 25, in the parish of Santa Maria de Sallent.

For a time, Claret was called the Weaver of Sallent, because of his work in the small factory of yarns and fabrics of his father and because after his youth, he was eager to advance in the knowledge of textile works and was directed toward this profession as a student and his projects with notable success.

His father, Juan Claret was an ex-officio weaver; his mother, Josefa Clará, came from a family of farmers. Anthony was the fifth of numerous children. In his family there were six men and five women.

Not in vain, he wanted to evoke in his Arch-Episcopal shield his homeland and his parents: “The bridge, river, waterfall and houses indicant Sallent my homeland, my father is from this part of the river and my mother of the other, and this symbolize the sun, Claret and the moon, Clará” (2, p. 413).

The birth home of Anthony Claret, educational sphere and his early years

“The family – in the Apostolic Exhortation Familiaris Consortio, by John Paul II- constitutes the natural setting and most effective instrument of humanization and personalization of society: it collaborates in an original and deep way in the construction of the world, making a strictly human life possible in transmitting virtues and values.”

To celebrate the birth of our Founder, it is essential to refer to the home; the house in which he was born and the family environment in which he grew up.

The Claretian pilgrim who arrives at Sallent, Spain, can visit the house in which Fr. Claret was born: a two story home, situated on Calle Cos, n. 4. The second floor was the family and in the lower part, today has been converted into a chapel, but had been the family workshop, with seven looms.

On the second floor of the house is the room in which Anthony was born. The complex has some original furniture and others new, having been transformed into oratory suitable for recollection and prayer. A cradle, located in the center of the oratory invites silence and reflection on Anthony Claret.

Some drawings which were inspired by the Autobiography of the Saint, evoke an atmosphere in which he lived his childhood. That same place without doubt was witness to the experiences of the Saint until he was five years of age, when lying and awake, having thoughts on the eternity and of punishment reserved for sinners. This greatly impressed him…, allusive to the duration of eternal damnation, probably heard in his tender years by some preacher, or read by someone in a pious book. These thought and its natural compassionate prepared him since childhood to fight without any truce for the future and salvation of souls.

The atmosphere in the home which took place in these years of his childhood and adolescence was very religious. His parents offers us a snapshot: they were “honest and God fearing and very devoted to the Blessed Sacrament of the Altar and the Blessed Virgin Mary” (Aut 3). In that household he practiced with fidelity traditional devotions of the Christian life, and frequented the sacraments. He read religious books, talked at the dinner table with delight and sharing before bedtime… In this environment, it is not strange that Anthony was formed in good customs and soon piety grew in him.

Anthony received from God a good character and was exemplary in the performance of his duties as a son and in his implementation and interest in school. In his Autobiography, he appreciates work, complementing the formation of his teacher and his parents.

To commemorate the date of his birth, i.e. we are pleased to be heirs of his Spirit. We thank God for the gift of his life for the good of the whole Church. The prayer that he wrote with humble and grateful spirit in remembering those first few years also becomes ours:

“My God, you have been so good to me! I have been very late in understanding the many great graces you have given me. I have been a useless servant and have not properly invested the talent you have entrusted to me. But Lord, I give you my word that I will work. Be a little patient with me. Don’t take my talent away; I’ll invest it wisely now. Give me your holy grace and your divine love and I promise you that I will work” (Aut 35).