DECEMBER 8 – THE IMMACULATE CONCEPTION OF THE BLESSED VIRGIN MARY

Today we are celebrating the Solemnity of the Immaculate Conception of the Holy Virgin Mary. This liturgical solemnity takes place in Advent, as an invitation to contemplate the image of Mary, full of grace, before contemplating the whole mystery of Bethlehem. For St Anthony Mary Claret, the fact is that the Immaculate Conception has a dual dimension: personal and social. 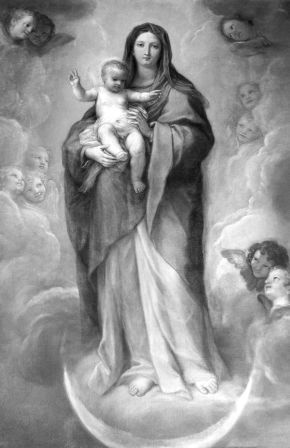 For the Claretians, heirs of the spirit of St Anthony Mary Claret, Mary Immaculate is: above all the victorious, the New Eva and the enemy of the serpent, fighting against the underworld enemy, the great ally in battle against evil in all its forms. On this day, the Religious of Mary Immaculate (Claretian Missionary Sisters) celebrate their principle feast day.

Historical note about the Liturgical Solemnity

The first indications of this celebration goes back to the VII century, in the East, on the basis of a tradition that claimed the faith that the Mother of the Lord was free from any stain of sin. In the West, by contrast, the feast began to be celebrated in an official beginning in 1476, as it appears in the Roman Liturgical calendar. Some centuries earlier, theologians were arguing the issue of Mary being free from any stain of Original sin. For the Christian people this conviction was a prerogative granted by God to the Mother of his Son.

This reached the status of dogma on December 8, 1854, when Pope Pius IX proclaimed in his Bull “Ineffabilis Deus,” that Mary because of the merits of Christ, was preserved from all sin; a unique mystery which harmonizes her exemption from Original sin with the absolute necessity that every human creature has the redemption offered by Jesus Christ. She was preserved from sin, she was pre-redeemed.

Mary is the first to be redeemed, the first believer, the first sanctified and glorified of the Church. This greatness of Mary has much to do with the entire community of believers. It would be wrong to imagine the Immaculate only or primarily, as an exceptional case, as a completely different condition and isolated from the rest of humanity or of the Church. According to Scripture, any event that occurred in time is a realization of the divine plan of salvation by the merciful love and wisdom of the Father “before the creation of the world” (Eph. 1:4). Also the Immaculate Conception is part of the salvific plan of God, in the “same decree,” as I would say in a language more legal with the Papal Bull “Ineffabilis Deus.”

This is why the greatness of Mary, which has its starting point in the mystery of her Immaculate Conception, is not an exclusive grace belonging only to her, but reaches in some way to every Christian. It is the ideal of the whole Church. We were reminded of this in the Second Vatican Council: “Mary is the purest image of what the Church is and is anxious and yearns to be” (SC 103). That is precisely why the liturgy presents today the Immaculate Mary as “beginning and image of the Church,” as is sung in the preface of this solemnity.

The Solemnity of the Immaculate Conception, falls within the time of Advent, and becomes a source of hope for the whole Church when preparing to receive He who is to comes and blesses everyone with all kinds of spiritual and celestial gifts (cf. Eph 1: 3). In fact, Mary, full of grace, as called the angel (Lk 1: 28), reminds us that God also chose us in the person of Jesus to be holy and blameless before Him in love, which is to give praise for his glory (cf. Eph 1:12-13).

In the biblical texts of this liturgical solemnity, and which offers us a daily liturgy during the Season of Advent, we find a solid basis – in tune with the centuries-old tradition of the Church- the understanding of the dogma of the Immaculate Conception and to promote and develop the devotion to the Mother of the Lord. The Word of God helps us to frame this figure in the overall vision of the Christian mystery, to place it in harmony with the various elements of the history of salvation and to behold above all, along with one’s living center which is His son Jesus Christ.

It is well known that Mary occupies an important role in the spirituality of St Anthony Mary Claret and is also highly significant by her presence in the origin and history of our Congregation. On the other hand, her figure appears as a constitutive element and basic structure of the renewed Constitutions, while in a discreet manner happened in the Gospel.

Now, when we are celebrating the Solemnity of the Immaculate Conception, we are reminded to recall that this is precisely the adjective that forms part of the official name of our Congregation and is the one that applies to the Heart of Mary: “We are call Sons of the Immaculate Heart of Mary or Claretian Missionaries,” say the Constitutions (CC# 1). The term “Immaculate” is used six other times in the constitutional text, always applied to the Heart of Mary. Therefore it appears in total 7 times (cf. numbers 1, 4, 8, 9, 71 and 159; in the latter -which is the formula of our profession- and it appears twice).

It is not so much the number of times that the word immaculate appears in the Constitutions, nor the fact that it is in a context of official denomination of our Institute, or the designation of our being Claretian. What gives importance to this adjective is the context which it bears within each person. What matters is that it doesn’t go unnoticed and that it captures our charismatic significance.

If we stress more than what the term Immaculate suggests, we would find ourselves on the surface of what we as Claretians must understand and try to bring to our daily commitment. In effect, the first thing that is usually highlighted is that Mary is – and who would dare to doubt this point? – She is pure, blessed, beautiful and without blemish, etc. But we cannot permit ourselves to be fascinated by the aesthetic resonances which such expressions awaken. It is necessary to grasp what Mary Immaculate represents for our Founder and for ourselves.

For St Anthony Mary Claret, the mystery of the Immaculate Conception has a dual dimension: personal and social. With certainly, she includes the fullness of grace and preservation of all sin, but we sense in this mystery a special apostolic dimension: to contemplate the plan of God defeating the serpent and his offspring through the woman and her children. For Claret, taking as the backdrop for his apostolic horizon on the vision of the Book of Revelation (cf. Rev 10:12) and the prophecy of the book of Genesis (cf. Gn. 3:15), the woman is Mary and her offspring are all her children, especially the missionaries (cf. Aut 686-687).

Father Claret understood from this key, the dogma of the Immaculate Conception, and this was reflected in his Pastoral Letter on the Immaculate. Claret contemplates the mystery of the Immaculate in an apostolic meaning of struggle. More than a mystery of beauty, the Immaculate is for him, the conqueror of Satan and we must continue to fight against and overcome Satan because we are her offspring. That is also the point that has the presence of Mary in our Congregation and in our evangelizing ministry. For the Claretians, heirs of the spirit of St Anthony Mary Claret, Mary Immaculate is above all, the Victorious, the new Eve and enemy of the serpent, for she fights against the infernal enemy, the great ally of the battle against evil in all its forms.

That is the charismatic sense- the apostolic plan – which the mystery of the Immaculate holds for us. Mary Immaculate (or the Immaculate Heart of Mary) is the stimulus in our vocation.