Venerable Fr. Jaime Clotet was born on July 24, 1822 in Manresa, Barcelona, Spain. He was the youngest of eight children, and baptized on the day of his birth. He studied for three years with the Jesuits of his hometown, before moving on to Barcelona, where he studied rhetoric and philosophy at the Institute of Secondary Education at the University of that city. 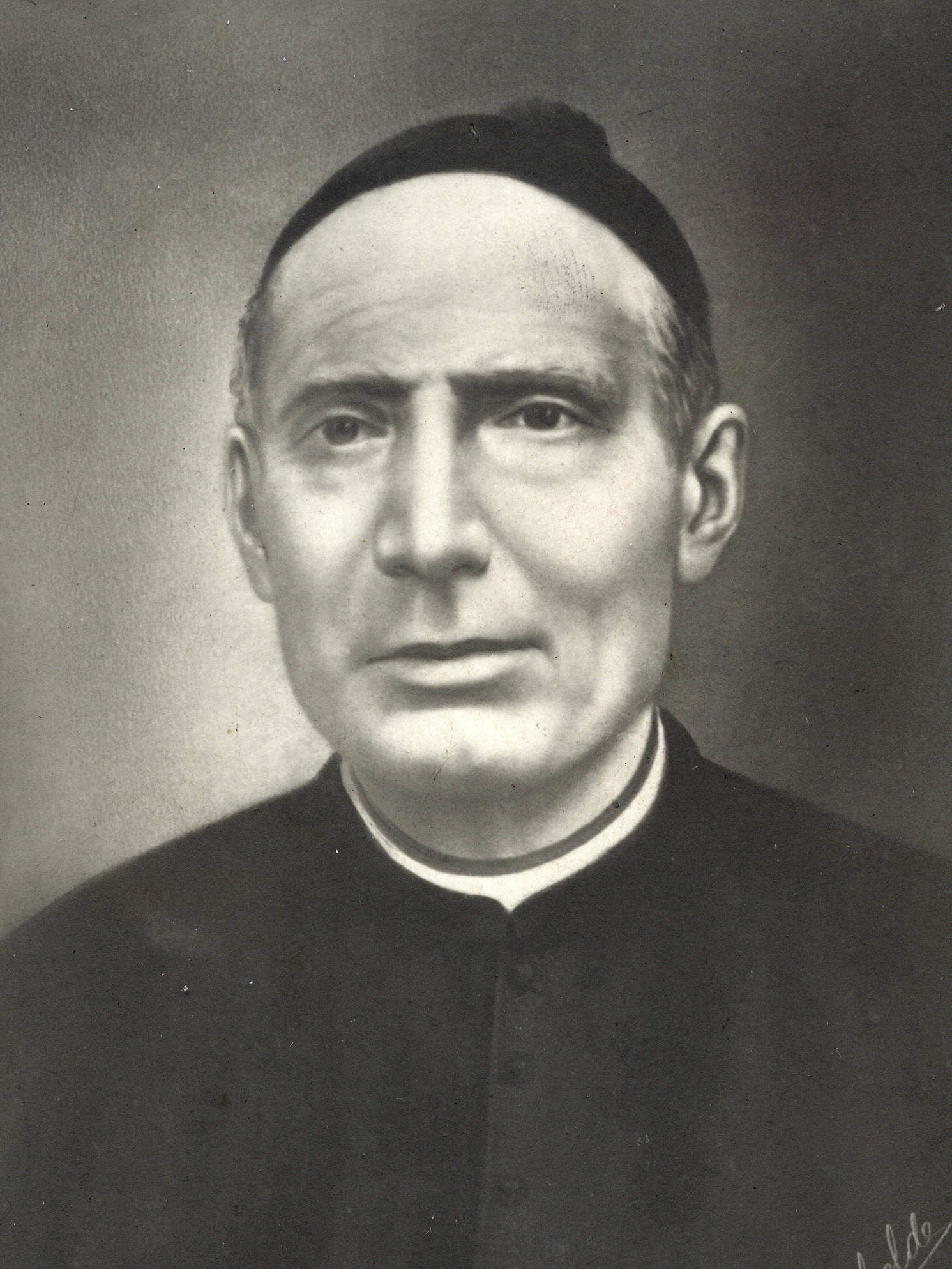 At 17 years of age, Clotet entered the Seminary of Barcelona, and later studied in Vic. Persecution of the Church in Spain caused Clotet to take refuge in France and Rome. He was ordained a priest in Rome on July 20, 1845. On his return to Spain in 1846, he was assigned as Vicar treasurer of Castellfollit del Boix, a parish near Monserrat. In 1847, he was appointed treasurer priest of Santa Maria Civit, another small town in the mountains.

Four years of pastoral ministry were of considerable benefit to him, but Clotet longed to be a missionary, and in June, 1849, he asked Bishop Dr. Jaime Passarell to allow him to leave the parish. Providentially, Clotet met Fr. Claret, who was about to start a new Congregation, and on July 16, 1849, was among the co-founders. The new Congregation proved to be the ideal setting, in which to realize his calling.

Clotet’s early years of ministry in the Congregation were devoted to popular missions, retreats and, catechesis, the latter the ministry to which he felt particulary suited. During the winter months, when the missionaries remained at home, Clotet devoted himself to prayer and study. He felt himself entirely imbued with the spirit and style of Claretian life.

Claret loved Clotet as a son, and Clotet devoted himself to collecting details of Claret’s life and testimony of Claret’s holiness, in hope of introducing the cause for Claret’s beatification. Clotet’s holiness and practical contributions were indispensable to the survival and success of the fledgling Congregation.

Clarification of the missionary vocation

Clotet had finally embarked on his missionary vocation and found in the new Congregation the best way, in which to pursue it. “… Many years later, he would jot down in his notes the minutest details of the life of the Institute in its early days, particularly the words and example of the Founder …Clearly, all this came to reconcile perfectly with the spiritual dispositions, with which he had entered. As he himself attests, the Missionaries lived an intense community life during those first months, a kind of novitiate. Jaime Clotet felt at home in such a spiritual, disciplined and fraternal environment. Moreover, the environment, as well as the presence of the Founder, could not but intensify his desire to surrender himself completely to the work of sanctification … In fact, in a list of benefits, he emphasized the fervor he experienced during those first months (Mss. Clotet IV, p. 240)” (4, pp. 83-84).

In his first years in the Congregation, Clotet devoted himself tirelessly to preaching missions, directing the spiritual exercises and, above all, to catechesis, the ministry for which he felt particularly suited. He felt himself profoundly imbued with the spirit of Claret and sought to emulate in the smallest detail the life of Claret, spending months at home in La Merced, devoted to prayer and study, then months on the road preaching.

Generous and Steadfast Service to the Congregation

With the death of Fr. Stephen Sala in 1858, Fr. Xifré was elected Superior General. Clotet was elected the first Sub-Director and held that position for thirty years. He was not re-elected in the General Chapter of 1888, but Xifré appointed him Secretary General, and Clotet served in that capacity until he was forced by the Revolution of September 1868, to flee to France. From 1865 to 1895, Clotet served as local Superior of several of the first houses of the Institute in Spain and France: Vic, Prades, Thuir, Santo Domingo de la Calzada, Cervera and Gracia. He also devoted himself to the formation of our missionaries, particularly the missionary brothers.

Most of Clotet’s years as a Claretian Missionary were devoted to ministry within the Congregation. Without doubt, he was needed as a complement to Xifré. Both were profoundly devoted to our Founder, and both respected the other’s strengths in furthering the goals and growth of the Institute. Still, Clotet was forced to bear up under Xifré’s exceptional energy and authoritarian bent. His trust in God, his prudence, sincerity and love for the Congregation sustained him and allowed him to counsel and inspire many members of the Congregation.

Faithful Friend of the Founder, Who Kept His Memory Alive

“Few knew Claret as intimately as Clotet, not because they lived together for any length of time but because of the spiritual bond forged between them following the founding of the Congregation and during Claret’s visits to Vic and Gracia. Moreover, Clotet attended to Claret during his final illness with exemplary filial affection” (2, p. 5). The two men shared an endearing, mutual love. Claret always spoke affectionately of the venerable co-founder. In turn, Clotet emulated Claret from the moment they met.

Clotet was moved by Claret’s affection to spare no effort in collecting data and testimony of the Founder’s holiness and to launch the the process of beatification. As a result of his extensive research, Clotet penned the summary of an admirable life: “The results of this ambitious undertaking are priceless, not simply for the impressive collection of documents, which argue convincingly for the exceptional holiness of our Venerable Founder, but because as a historical document of the first order, it reflects Clotet’s scrupulous attention to detail. By all means, he accomplished his purpose, which was to showcase Claret’s heroic virtue and pave the way for his beatification “(1, pp. 280-281).

This brief work led to the publication of a more comprehensive and detailed study. The Exemplary Life of Fr. Clotet, Missionary and Founder was published in the year 2000, on the occasion of the centennial of Venerable Clotet’s death the 150th anniversary of the founding of the Congregation.

The Apostle of the Deaf

Apart from his years of service to the Congregation, Clotet also distinguished himself for his ministry with the hearing impaired. His book on signing was well received by others engaged in that ministry. Clotet also wrote several pamphlets for clergy and on the formation of the Claretian missionary brothers.

The Abiding Presence of God

Fr. Clotet’s faith, wisdom, counseling of others and his peaceful demeanor were evidence of his being consistently aware of the Lord’s presence. One observer wrote: “Dear and revered by all, entirely for God … he passed through the land leaving sweet scents of holiness, creating an atmosphere of love, and providing consolation to many. He did not have an enemy “(3, p. 53).

Thank God, we have different writings by Clotet, providing us a glimpse of his spiritual experience. Following his priestly ordination, he was aware for an entire year of living in God’s presence. Gradually, he moved beyond the ascetic pursuit of the Lord’s presence to the mystical experience of living in his presence. Though he was a contemplative man, he was not caught up in his own inner world. He was convinced that authentic missionary zeal arises from only a profound experience of God.

A Brother and Friend Destined for Glory

In 1885, very ill and nearly blind, Clotet was assigned to the community of Gracia (Barcelona), where he died on February 4, 1898. In an obituary for the Annales, Fr. Xifré wrote that Clotet”… reached seventy-five years of age, and throughout his life he was a model of piety, zeal and every virtue, as anyone who knew him, dealt with him or witnessed his death would affirm. His patience, resignation and fervent love of God in the face of death were beautiful and uplifting” (5, p. 296).

Pope John Paul II declared Clotet Venerable on May 3, 1989. The official document attests: “Among brothers of the Congregation, he has always been considered a perfect example of the Missionary ideal set by St Anthony Mary Claret […] Following his priestly ordination, he was keenly aware of the intimate presemce of God’s presence in his soul […]. His mission in the Institute can be summarized as that of a strong defender of the inner life in an intensely apostolic Institute. God’s presence was a constant stimulus in his exercise of all the virtues. An extraordinary supernatural gift of faith lived in intensity and characteristics stated in authentically apostolic […]. The servant of God, in being Sub-Director and Secretary, gave constant proof of admirable prudence. […] He was a model of justice, interior and exterior peace, moderation, delicacy of conscience, unlimited confidence in divine grace. The constant exercise of these virtues earned him the admiration of all and his life was uplifting climaxing in a peaceful death “(5. p. 296).

Clotet remains our brother and friend, who encourages us to live our identity and Claretian Missionaries today more boldy and consistently.