Father Solá was born to a humble family on October 7, 1895 in Masia Vilarrasa de Taradell, near Vic.

His made his First Profession on August 15, 1914. After ordination, he was sent as a missionary to work in Mexico. 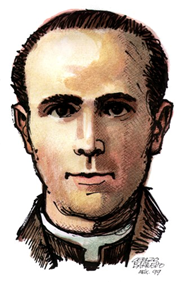 The religious persecution intensified closing Churches and pursuing priests and religious. On April 25, 1927, three servants of God were murdered. Both Leonardo and Fr. Rangel died immediately, but Fr. Solá went through a long agony of martyrdom. They are known as the “martyrs of San Joaquin,” because of the name of the ranch in which they were killed.

Our Claretian brother, Father Andrés Solá Molist was beatified in Guadalajara along with 12 Mexican martyrs on November 20, 2005. A Claretian, Cardinal Jose Saraiva Martins presided over the celebration.

Life and witness to martyrdom

Father Solá was born on October 7, 1895. Although the house where he was born belonged to the municipality of Taradell, he was baptized, in the parish of Santa Eugenia de Berga, a town very close to Vic. Two months later he received the Sacrament of Confirmation from the hands of Bishop Jose Morgades in the Church of Santo Domingo, Vic which is the Claretian parish in the city.

His parents were Buenaventura Solá y Comas and Antonia Molist Benet. Blessed Andres grew up in a Christian family environment, normal to many homes of the Vic countryside. He had eleven brothers. The main wealth of the family was the love of God, the Blessed Virgin and the Catholic Church. In the family piety, two more vocations flourished, that of his brother Jaime, also a Claretian and Eudaldo a diocesan priest of Vic. On the other hand, the family was economically poor. They were not owners but farmers, who lived in a ranch house and cared for the property. This is why they moved from a farmhouse to another when the circumstances was favorable. In fact, not long after Andrés was born, the family moved the farmhouse in Vilarrasa, Taradell of El Clarà de Sant Martí de Sentfores, a town known in the countryside of Vic as was La Guixa.

At the age of twelve, he received his First Communion. By this time had the opportunity to listen to the preaching of a Claretian Missionary from our Mother House in Vic. In his heart he heard the call of the Lord to be a missionary like Fr Claret. This decision was difficult for his father to accept because Andrés was very helpful with the chores on the farm and field, but like a good Christian, he accepted the will of God. When Andres was in the Postulancy in Vic, his family moved to Alpens, about 20 kilometers from Vic.

Andres lived his desire to follow Jesus Christ with conviction. Completing the Postulancy in Vic, he entered the Novitiate in Cervera. During his Novitiate year, he experienced health problems which tested his vocation. With a clear conscience, he made his Profession as a Son of the Immaculate Heart of Mary. His First Profession was on August 15, 1914.

In his advance studies, he worked with dedication to reach his intellectual potential while learning human values and he grew in spiritual finesse. His inner life was strengthened as he worked to give balance to a temperament some feared may be prone to radicalism. The Lord was preparing him to be a hero.

In obedience, he was assigned as a missionary in Mexico. He worked as a teacher in the Claretian Postulancy of Toluca. His time was divided with popular preaching. In Christmas 1924, he was sent to the community of Leon, Mexico, where he was able to engage more in preaching despite a veto by the Mexican Government for any foreign clergy to exercise pastoral ministry.

The religious persecution intensified closing churches and expelling priests and religious. Father Solá remained faithful to his vocation as a pastor of souls sharing the Word and the sacraments. He had zeal for the salvation of souls like the Venerable Anthony Mary Claret did few decades earlier. He did not turn his back on danger because of his pastoral commitment. Attending to the Catholics in their homes with the celebration of the Eucharist, hearing confessions, Eucharistic Adoration and given the lack of priestly service because of the anti-religious conditions, he sought permission to Baptize, celebrate Marriages and Administer the Anointing of the Sick.

The beginning of his martyrdom happened after celebrating the Eucharist and Holy Hour with benediction. Both he and his lay collaborator Leonard Perez were discovered. A studio photograph of a First Communion, betrayed Fr. Solá as a priest. From this moment everything changed rapidly. They accused him, Mr. Perez and the young Mexican Priest Trinidad Rangel of having assaulted and derailed a train. During the interrogation, Father Solá said with fortitude: “I am lawful and say that I have not committed any crime that I am aware of. I know that I have fulfilled my duty as a missionary who I am.” The three were transferred by train to the place where there had been an attack earlier – the attack and derailment charged- and there the three were martyrs, arms raised in a cross, received the blow of a pick, but not before shouting with all their strength and fervor: “Long live Christ the King!” It was April 25, 1927.

Mr. Perez and the Fr. Rangel died immediately, but our martyr, mortally wounded, lived three more hours. Some workers from the railway were witnesses to the martyrdom. After a few hours the attackers approached him. Father Solá not ready to die and realizing the presence of those people said: “Two of us are priests and die for Jesus, we die for God, I am badly injured and I die for Jesus. Don’t forget to tell my mother, any way you can, I died, but tell her that her son is a martyr.” Father Solá requested a little water, like Jesus on the cross. His last words were: “Jesus, have mercy! Jesus, forgive me! Jesus, I die for your cause! ¡Oh my God, I die for you!”