Josep Xifre was born in Vic, Spain, on February 18, 1817. He entered the seminary of his hometown in 1829. He was ordained a priest in Rome on February 16, 1840. He was a co-founder of the Congregation of Missionaries and Superior General, elected on May 1, 1858 and re-elected in the General Chapters of 1864, 1876 and 1888. A man who was straight forward with a generous spirit, he was moved by a noble idealism accompanied by an energy and extraordinary leadership. His knowledge was always focused in the service of the faith; his desire in the service of virtue and his heart at the service of the ideal. He was a man of deep faith and a lover of the Congregation and the Church. Asked to be Spiritual Director of Father Founder, he interacted with him continuously from 1858 until the death of the Saint for advice on many issues of the Congregation. Father Xifré imposed the mandate on Claret to write his Autobiography (cf. Aut 1), the document of incalculable value for the life of Claret and the Claretian spirit. After an intense missionary life in the government of the Congregation, he died in Cervera, Lleida, Spain on November 3, 1899. He left a profound impact on the life of the Congregation after working tirelessly for its expansion and development. 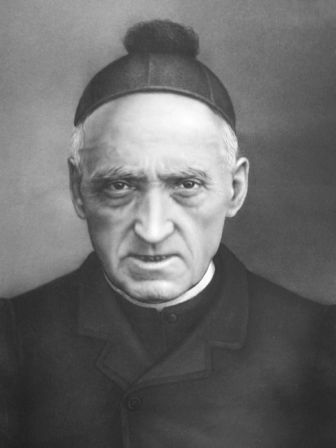 In addition to his many letters, published the Cleri socius (1867), the Spirit of the Congregation of Missionary Sons of the Immaculate Heart of Mary (1892), the Auxiliary of the Missionaries (1892-1893) and a Treatise on Divine Grace (1899). During his time as General, he began the publication of the Religious Bulletin which later became Annals of the Congregation and also the magazine Mariana, The Iris of Peace or the Immaculate Heart of Mary, which began to be the Newsletter of the Heart of Mary.

One of his main concerns was to stimulate fidelity to one’s vocation and the love for the Congregation. In the letter “To be faithful to the vocation,” and in the aforementioned “Spirit of the Congregation,” he calls attention to them and gives guidance to help the brothers to overcome certain vocational difficulties.

Father Xifré began his time as General with a single mission-house, consisting of twelve members. When he died, he left the Institute organized, with its dual civil and religious personality. There were 1,782 members distributed in 61 houses in Spain, Italy, Portugal, Equatorial Guinea, Chile, Mexico and Brazil.

His Government was a decisive time in the history of the Claretian Institute; it was blest with initiatives and achievements. During his time, the Congregation consolidated and grew in a dramatic way.

In 1861, the Novitiate and Scholasticate was created in Vic. The Novitiate was for priests and students. Students began growing in numbers which raised challenging problems. Father Xifré took the first steps to resolve some of these problems, mainly with the admission of young students. Father Claret, who always viewed the Novitiate and Scholasticate of Vic with affection, wrote the Regulations for them in 1862 with the guidance of Fr. Claret. That same year, Father Xifré wrote an Instruction, considered the first document of vocation promotion in the Congregation.

He interacted with Father Founder frequently and this proved fruitful. Father Claret continued to be very close and even was present in the Congregation despite his duties as Archbishop and Royal confessor. He visited the houses in Vic and Gracia in 1859, 1860, 1862, 1864 and Segovia during his summer stays with the Queen at La Granja. In these visits, he lived with the missionaries as one of them. It was Fr. Xifré who asked Father Claret, in virtue of obedience, to write his Autobiography in order to contribute to the formation of new missionaries. Fr. Claret wrote it in Madrid and personally gave it to Father Xifré on a trip to Vic in 1862.

In the General Chapter of 1862, they adopted an oath of permanence, the consecration and simple vows, and recognizing the students as a new category of members in the Congregation. In 1865, the formula of religious profession was introduced and he encouraged all members of the Congregation to make their profession. Father Claret made his profession at the end of his life on October 8, 1870, in Fontfroide, France, from the hands of Fr. Xifré.

The first foundations in America was in Chile. On December 13, 1869, the first missionaries arrived in Santiago, Chile. Fr Paul Vallier arrived first. Once he was installed, Fr. Xifré soon visited the new missionaries. He would make a total of three visits to the missionaries of Chile. Fr. Vallier extended the Congregation in Chile by founding a house in La Serena in 1873. In 1876, he was appointed as Visitor.

Fr. Xifre accepted the Ministry of Education in consultation with Fr. Claret. In 1885, when the Spanish Civil authorities granted Religious communities authority to teach, the Congregation already had schools in Segovia (Spain, 1884), Toluca (Mexico, 1884) and Gracia (Spain, 1885). The following years the Claretians established other schools in Spain like Zafra, Alfaro, Calatayud, Medina de Rioseco, Las Palmas, Santa Cruz de Tenerife, Almendralejo and others. Fr. Claret thought the Brothers could serve in this ministry, but Father Xifré believed it more convenient to use the priests.

Fr. Claret like the Congregation suffered serious persecution. During the revolution of 1868, Fr. Claret went into exile in France and Fr. Xifré had to cross the Pyrenees to search for accommodation where he could find refuge for the members scattered because of the persecution unleashed against the Church. He found a house for rent in the small town of Prades, which on February 2, 1869 became the center and heart of the Institute. Later he founded a Formation house in Thuir (1871). Fr. Claret arrived at the house of Prades on July 23, 1870. One could already see the prophetic growth of the Congregation throughout the world and Claret sensed that his death was near. Soon, on August 6, he was forced to abandon the house and go into hiding at the Cistercian monastery of Fontfroide, near Narbonne. After several days of terrible uncertainty and a slow and painful agony, Fr Claret was called to the house of the Lord in that monastery on October 24, 1870.

The Congregational magisterium of Fr. Xifré was very wide and varied. He addressed numerous letters to the Congregation dealing with fundamental issues of our life; he also wrote other community letters in response to specific circumstances taking place in the Congregation at that time. He also wrote several books for pastoral orientation for our brothers and especially the very important book entitled “Spirit of the Congregation of Missionary Sons of the Immaculate Heart of Mary.” He added in the prologue: “With Him we longed to light the spirit of a Son of the Heart of Mary”.

The Congregation a work of God

It is the starting point and the essential foundation for the pursuit of his message that is set in the book “The Spirit of the Congregation”. Fr. Xifré was a man of deep faith and firmly believed that the Congregation was a work of God, working for her and loved her to death. He tells us that this is the work of God because “the Congregation has as its founder His Excellency, Archbishop Anthony Mary Claret, who in his ardent zeal seeks the glory of God and the salvation of souls, after having traveled, with Fr. Avila to many cities and towns of the peninsula and Canary islands; he was inspired by God to found an Institute or Congregation with the title of MISSIONARY SON OF THE IMMACULATE HEART OF MARY” (5, p. 9). The plan of the Father Claret was to form a Congregation that with the title of Sons of the Heart of Mary, had as its objective to procure the glory of God and the sanctification of their members and the salvation of souls throughout the world. As evidence of this, “Give the inclinations and purposes that he made in his prayer on the day on which the Giver of all good inspired him with this idea: Helped by His grace, he said to God and to the Blessed Virgin Mary, and the brothers which you give me to form this Congregation, of which I will be the last and the servant of all; and by the same, I would kiss their feet, serve them at table, and be very happy to exercise these offices” (4, p. 13).

Fidelity to the Vocation

Fidelity to one’s vocation is not a simple promise until death. To be faithful is not only a concept of time, but a quality of life. The vocational fidelity implies that the missionary lead a holy life, to conform to it according to his most radical demands and is adorned with the virtues that correspond to his vocation. Jesus Christ and the Apostles are the models to follow if we wish to be faithful to our vocation, to overcome the difficulties that challenge the same and to attain true apostolic zeal. Jesus Christ our Lord, who called and sends us, has to be our model, Teacher, doctor, father, friend and refuge. The apostles without stopping in the face of difficulties, or by threats nor frightening sacrifices, even the right to life, made its voice resound throughout all the land; and after filling the object of his vocation, he will received the eternal award that he had been promised.

Love for the Congregation

The Sons of the Congregation have to love with all their heart, with affection, love, and selflessness. He should love as a mother because she is like our mother, which have received countless blessings both material and spiritual. What the Congregation has done for each of its sons without question of sacrifices is great. To correspond to this self-sacrificing love we must be faithful, fulfill the Constitutions of the Congregation and cultivate the virtues that a missionary needs.