Today we celebrate the feast of these three archangels.

Michael means: one who is like God. Many institutions have been placed under St. Michael’s patronage and many Christian faithful implore his protection, especially to assist them when it comes to fighting the last battle in this world comes. Our Founder had a special devotion to the Saint, who he invoked before starting missions and under whose name and tutelage he gives to the Academy of St. Michael, the Religious Library and the Congregation of Missionaries, which he wanted as co-patron. 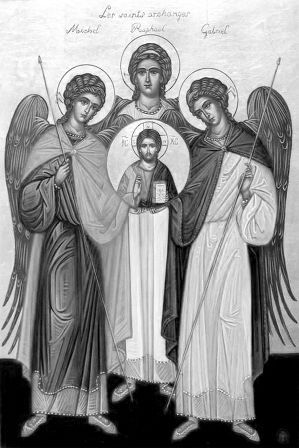 Gabriel means: God is my protector. St. Gabriel, is recognized as patron of communications and communicators, because he brought the world the most beautiful news: the Incarnation of the Son of God.

Raphael means: medicine of God or God will cure. St. Raphael is invoked by many faithful to ward off diseases and his protection is requested when one takes a trip.

The celebration of the feast of these three Archangels and, in particular, that of St. Michael, Prince of the heavenly spirits is an occasion to renew our resolve to contribute to the growth of the Kingdom of God, battling against the forces of evil from our missionary charism in the Church.

The three are referred to in Scripture and the Church venerates the three following old tradition.

In our current constitutional text St. Michael is quoted explicitly as co-patron of the Congregation along with the angels (cf. CC 35), including therefore implicitly the holy archangels Gabriel and Raphael.

Michael who is recognized as one who is like God, is prepared to the fight. According to Scripture, he leads the battle against the infernal dragon and his henchmen, which had rebelled against God (Rev 12:7-9). This is why he is depicted in art as the warrior angel, the conqueror of Lucifer, by placing his heel on the head of the infernal enemy. Michael is threatening all evil with his sword, piercing with his spear, or ready to chain all that is evil forever in the abyss of hell.

In addition to that, there are two times that the Archangel Michael is named in the Bible. In Chapter 12, of the book of Daniel, when God sent him to a prophet to ensure his protection, and in the Letter of St. Jude (v. 9), where it is said: “the archangel Michael, contending with the devil […] he did not presume to pronounce a reviling judgment upon him, but said, “Let the Lord rebuke you.”

The leading role among the angels, especially with the Archangel Michael, is that many civil and religious institutions were placed under his patronage and protection. The Church greatly values its traditions and popular devotions that the protection of St. Michael exerts on the Christian faithful, especially when it lead them to paradise. It is St. Michael who will be fighting the last battle in this world.

The Archangel Gabriel is found several times in the Bible. We see that the prophet Daniel speaks and communicates well in advance about the time of the Redeemer (cf. Dn. 8 and 9). Then there is Zechariah, the surprised and incredulous husband of St. Elizabeth, who encounters St. Gabriel announcing the birth of his son, John the Baptist (Lk 1:11-20). But the most lucid intervention of the Archangel is when he performs the mission of announcing to Mary the Incarnation of her Son, Jesus (cf. Lk 1: 26-37).

St. Gabriel is seen as the patron of communications and communicators, because he brought the world the most beautiful news: the Incarnation of the Son of God.

Raphael means: God will cure. In the book of Tobit, the Archangel presents himself as “one of the seven angels who is always present and intercessor to the glory of the Lord” (Tb 12:15). He was sent by God to help the elder Tobias, who was blind and was in great distress. He also accompanied the son of Tobias on a long and dangerous journey, taking human form and calling himself Azariah. With Raphael’s words, Tobias was able to marry Sarah without any difficulty.

St. Raphael is invoked by many faithful to ward off diseases and his protection is requested when taking a trip.

St. Anthony Mary Claret, had the custom to summon the Archangel Michael to guard his missionary work: “I never forgot to invoke St. Michael,” he says (Aut 268). “The third striking phenomenon was the master plan for the Academy of St. Michael,” an association of writers and Catholic propagandists (cf. Aut 581); I planned on setting up a Religious Library (Aut 329); and I wanted him to be co-patron of the Congregation of Missionaries.

Our Institute has been faithful to the will of our Founder, when we see St. Michael as co-patron and keep his effigy in the official shield of the Congregation. The first shield was designed by St. Anthony Claret in 1857, after his return from Cuba. It showed the Archangel Michael sword in hand, as an image of the missionary who fight God’s battles and that comes out in defense of God’s glory. There was a period of 38 years, from 1876 to 1914, that the figure of the shield of the Congregation disappeared. The Archangel Michael reappeared brandishing his sword in the new and definitive shield that was designed and which was presented by the General Government officially to the Congregation in 1914.

The charismatic inspiration is based on the presentation that the Archangel Michael has in the Bible (cf. Rev. 12:7 and Dn. 12). It evokes, also the figure of another courageous angel of Revelation (Rev 10:1), with its missionary projection in the sons of the Congregation of the Immaculate Heart of Mary, as the Founder confesses in his Autobiography (cf. Aut 686).

For the experience of our missionary spirituality

The celebration of the feast of St. Michael is occasion to implore the Archangel in our evangelizing ministry. In the Supplementary Regulations for Students, published in 1862: the Appendix to the early Constitutions, our Founder urged that the missionary students have a special devotion to St. Michael. He urged them to continually exhort the Archangel in their devotion to the Blessed Sacrament and Mary. The fact that he did so, should not be interpreted as an invitation to practice a simple and pious devotion, but must be read in light of the highly significant role that the holy Archangel has in our Institute. Again, let us say, it should be understood in our missionary call: as model of a warrior who is fighting the infernal Dragon and continually shouting- to be like God.

Thus, it is understood, not only for the students to be interested in learning more of this archangel. This should be the desire of all Claretians. St. Michael’s presence in the Congregations’ shield and seal or letterhead of our official documents is not only a decorative or devotional figure. It is a call to stay true to our spirit in the Church as well as an invitation to battle against evil in all its forms.