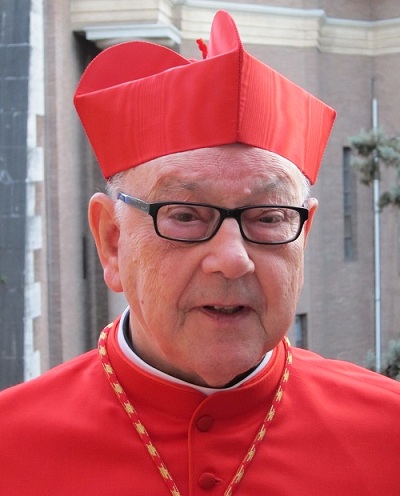 Fernando Sebastián Aguilar, born in Calatayud in 1929, joined the Congregation of the Missionary Sons of the Immaculate Heart of Mary in 1945 and was ordained priest in 1953. He studied theology in Rome and Louvain, obtaining a doctorate in 1955. From 1956 to 1979 he focused his activity in the study and teaching of Dogmatic Theology, first in the Centers of the Claretian Congregation, and from 1967 at the Faculty of Theology of the Pontifical University of Salamanca, where he was Dean and Rector of the University from 1971 to 1979. He was consecrated Bishop of León in September 1979. In 1982 he was elected General Secretary of the Episcopal Conference of Spain and served until 1988. In April of the same year he was named Archbishop Coadjutor of Granada. He became the Apostolic Administrator of the Diocese of Malaga from 1991 to 1993. In 1993 he was appointed Archbishop of Pamplona and Bishop of Tudela and became an Emeritus of the same in July 2007. He had been Vice President of the Episcopal Conference between 1993 and 1999 and reelected for the period of 2002-2005. He participated in six Assemblies of the Synod of Bishops. In 2001, the Pontifical University of Salamanca presented him with a Gold Medal in recognition of his services as Professor, Dean, Rector and Grand Chancellor. Pope Francis created him a cardinal on 22 February 2014.