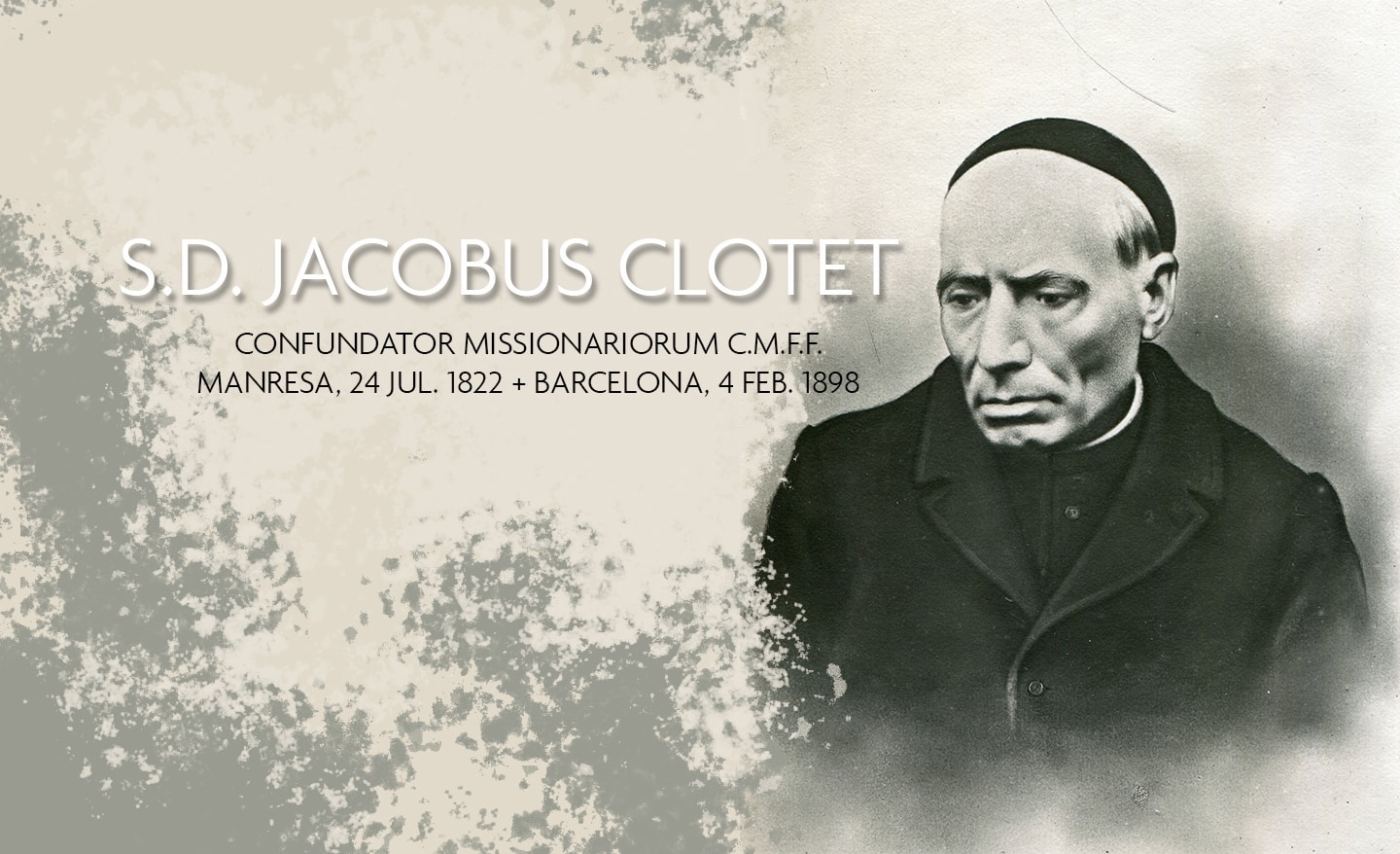 July 24, 1922, marks the first centenary of the birth of the Servant of God, Fr. Jaime Clotet y Fabrés, missionary, and writer of our Congregation. Clotet when we were studying philosophy at the University of Cervera. But that quick glimpse was deeply engraved in our souls, as well as the image of a saint, and of a kind saint, which has given him such fame inside and outside our beloved Institute.

Clotet left such a luminous trail of holiness that when he died on February 4, 1898, everyone wanted to see him on the altars and urged our Superiors to initiate the cause for his beatification. Clotet’s apotheosis was initiated by an illustrious fellow countryman, taken from our eyes a short time ago: Rev. Fr. Martin Alsina, Superior General. His predecessor of venerable memory, the saintly Father Clemente Serrat, had already commissioned the first historian of the Institute, Father Mariano Aguilar, to produce the biography of Father Clotet. But we wanted something more than the fame of the saint. We aspired for his glorification on earth. The biography came out in 1907. The first official step in the beatification process dates from the Request written to the Prelate of Vich by Rev. Alsina, on March 10, 1919. It is as follows:

Shortly after the request was presented to the Prelate of Vich, the steps for recognizing the tomb of Father Clotet in the cemetery of Barcelona began. About twenty people, including the Provincial of Catalunya, his Secretary, and the Superiors of the city of Barcelona, attended the recognition of the venerated remains deposited in a double box. They took great caution so that nobody took bones, and the devotion was limited to touching objects and prayer cards, which began to be distributed, 16,000 of them (letter of Fr. Jacinto Blanch of August 4, 1919).

The recognition of the tomb of Fr. Clotet was verified on July 3, 1919. On the following December 18, the ecclesiastical tribunal for the cause of his Beatification was constituted in Vich, under the presidency of the Prelate, as Ordinary Judge, and of the canon Dr. Jaime Collell, as Delegate Judge.

The simple initiation of the process of Fr. Clotet reveals his figure’s high prominence within the Congregation and even among its founders. The merchant of Vich, Mr. Miguel Trias, claimed to see Father Clotet as the same as Father Claret. Queen Elizabeth II thought she saw in Father Clotet the image of Father Claret when in 1889 and 1890 she had to testify in Paris and Madrid about the holiness of her Confessor. Many wished that he had ended his days in Vich, to have another saint next to Father Claret. The Penitentiary Canon of Urgel wrote in May 1907:

“He was a saint, he commended himself to him and attributed prodigies to him in life and death. In everything, even in his illness, he wanted to imitate Fr. Claret

Clotet did not have the oratorical gifts of Fr. Claret, but both possessed the same criteria and obeyed the same impulse of charity or love of all men. Fr. Santiago Mas, characterized three of the Founders in this way:

Father Mas continues: Father Clotet tried to imitate Father Claret in his life and ministries, Father Sala in the government of the houses and the direction of souls, and Father Xifré in the loftiness of views and ideals of divine faith. God wisely brought together the opposite characters of Father Xifré and Father Clotet so that the harmonious building of the Congregation of Missionaries arose from their mutual counterbalance. Father Clotet, like Father Xifré, was called by Father Claret to the foundation of our Institute in July 1849. Despite his youth, he served as local Minister (1850-65), Assistant Director and General Consultor (1858-88), Local Superior of several houses and schools in Catalonia, France, and Castile (1865-95), and Secretary General of the Institute (1888-95). The persecutions of Father Xifré during the Revolution and his repeated and prolonged absences obliged Father Clotet to serve as interim Superior General, winning all hearts by charity and prudence and by the exercise of the other virtues. The complicated government of the Congregation did not prevent him from preaching, writing, and doing other charitable works. Before the Revolution, he took part in more than 40 missions. He composed various short works for the Congregation and the clergy, without counting his classic Summary of the Life of Father Claret nor the materials for his extensive life. The writer’s soul was portrayed in the pamphlets and books for the catechesis of the deaf and mute. As early as 1850, he learned how to catechize the deaf and mute, opening a chair for them and writing what was necessary to perpetuate this work. In 1866, he published The Communication of Thought Utilizing Natural Signals; in 1870, the Catechism of the Mute; in 1890, The Catechist of the Ignorant Deaf and Mute; and in 1892, an appendix to this book.

This is the life of the illustrious son of Manresa, the seminarian from Vic, the Vicar of Castellfollit del Boix, the econome of Civit, and the Cofounder of the Congregation of Missionaries. And another Confounder, the very austere Father Xifré, wrote of Father Clotet these significant words: