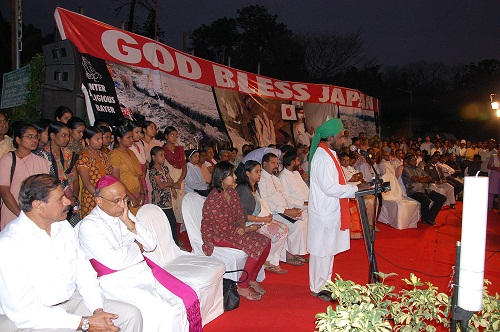 Bangalore, India. About 300 people participated in the God Bless Japan prayer service organised by the Archdiocese of Bangalore and the Sumanahalli Society at the MG road on the 17th evening.
It was a moment to express our solidarity as one human kind and specially with the people of Japan…

The candle lit to invoke Gods presence was shared by everyone. A candle was handed over to Mioinakayama, a Japanese national working in Bangalore. A condolence message was signed by everyone present . It was handed over to the two advisors from the Japanese Consulate in Bangalore- Salini valia & Paremitha Sarkar.
The Archbishop announced a donation of Rs. 1 million to the Tsunami affected people. He welcomed everyone to work towards this cause.

In a meeting following the prayer, a core committee was constituted to plan and coordinate a course of action for the tsunami affected. Sumanahalli society will coordinate these efforts.
Let us work together to make our efforts to provide our solidarity and assistance to the Tsunami affected in Japan.