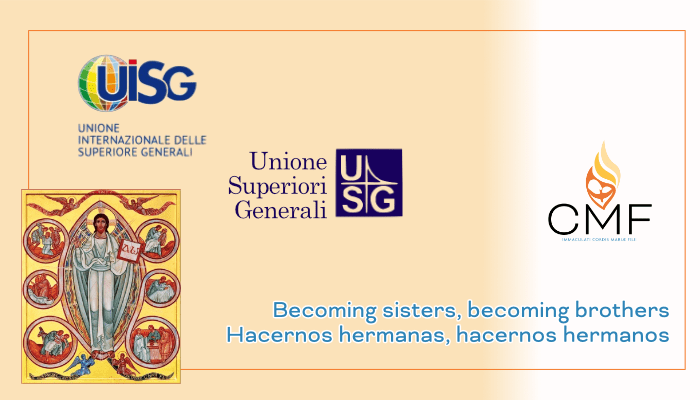 Father Arturo Sosa Abascal, Superior General of the Society of Jesus and President of the USG, opened the assembly, inviting us to “work for a fraternal world that opens us to the culture of encounter in our religious communities and that makes us be united to the people”. Father Sosa also indicated two points to guide the assembly: the first, “to accept the invitation of Fratelli tutti to unite ourselves to the reality of the wounded of history, having the courage to approach them, touch them and heal them”; the second, “the challenge of being part of the people on the way, that is, synodality, which should be our way of living and participating in ecclesial communion”. In addition, he added that “as religious men and women, we find ourselves in the best conditions to be artisans of peace and justice […] We must overcome the causes of exclusion so that everyone can participate in social and political life. The best policy is to put ourselves at the service of the common good, so that peoples and nations can live a social friendship”.

Sister Jolanta Kafka, RMI, Superior General of the Religious of Mary Immaculate and President of the UISG, also expressed that this joint assembly, in the midst of these difficult times, intends to “give voice to our vocation to follow Jesus, a vocation we share with the whole Church”. She also invited us to “take care of our common family. There will always be a wounded person in need of care, but together we have to find a way for our religious life not only to be on the move, but also to be able to get down on our knees, able to unite in caring for our brothers and sisters”.

Then, two reflections were presented with a more experiential than theoretical tone. The first revolved around looking at the face of the brother and touching his flesh; the second gave an answer to the question: what does it mean to “become a neighbor” to my brothers and sisters and to wounded people?

As a member of the USG and participant in the assembly, our Superior General, Fr. Mathew Vattamattam, CMF, will continue to report to us on the development of the themes.