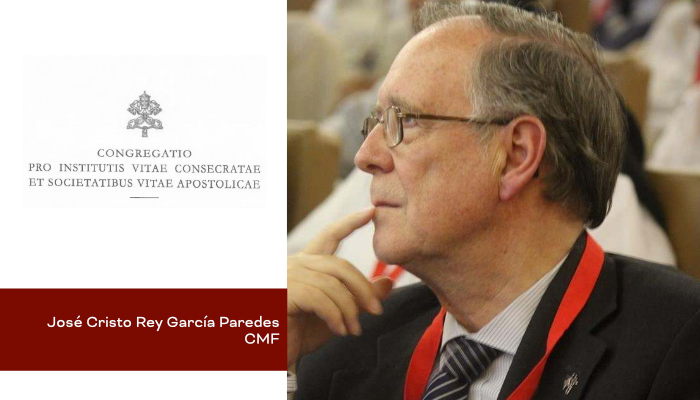 Madrid, Spain. A letter from the Secretariat of State communicated a few days ago to Fr. José Cristo Rey García Paredes, a Claretian of the Province of Santiago, that Pope Francis continues to count on him as official consultor of the Congregation for Institutes of Consecrated Life and Societies of Apostolic Life (CIVCSVA), a department of the Holy See that accompanies the journey of the more than eight hundred thousand consecrated Catholics spread throughout the world.

As in other areas of ecclesial life (communication, culture, integral human development, interreligious dialogue…), the Church closely follows and attends to the persons and institutions related to consecrated life in a service of animation coordinated in recent years by Card. Joao Braz de Aviz and Mons. José Rodríguez Carballo (OFM), Superior General Emeritus of the Order of Friars Minor (Franciscans).

In recent decades the Holy See has taken great care to ensure that the service of the Roman Congregations is enriched by the word and experience of people living in the various continents. Current members of the Congregation include Cardinals Ricardo Blázquez and Luis Ladaria and Spanish Bishops Jiménez Zamora and Hernández Sola. In 2019, the Pope, while appointing seven superiors general as members of the CIVCSVA also appointed seven superior generals, including Br. Maria Rita Calvo, of the Order of the Society of Mary.

Fr. José Cristo Rey García Paredes, professor at the time of the Institute of Theology of Religious Life of Madrid, to which he continues linked as professor emeritus, continues to be very actively linked to the Vida Religiosa Magazine and to the other works of service to the consecrated life animated by the Claretians in Spain. This same week he takes part in a week of theology of the consecrated life encouraged by the Claretian Theological Study of Curitiba (Brazil), after giving several weeks ago some classes in the Theological Institute of Consecrated Life ‘Sanyasa’ of Bangalore (India) and animating a week of spiritual exercises organized by the Claretian Province of Centroamérica.

Fr. García Paredes, who is also giving a course on the new orientation that should be given to the provincial and general chapters and collaborating with the formative proposals of the Spanish conference of religious (CONFER), continues to be a prolific writer. To his numerous written works, many of them published by Publicaciones Claretianas de Madrid, have recently joined ‘What the Spirit has united. Marriage and Family. XXI Century‘ (2020) and ‘St. Joseph, heart of husband and father’ (2021), both published by Editorial Perpetuo Socorro of Madrid.

After almost twenty-five years residing in the Claretian community of Buen Suceso in Madrid, Fr. José Cristo Rey is now part of the community that attends the Parish of St. Anthony Mary Claret and the Claret School of the capital.