Meeting of the Provincial Governments of Iberia 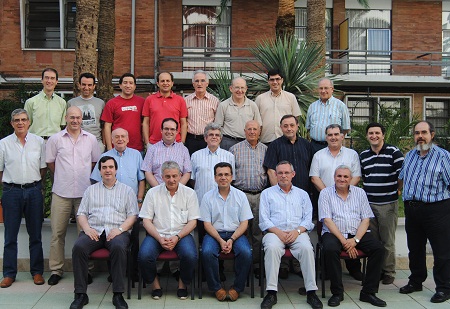 Sevilla, España. From June 17-20 at the Provincial Curia of Bética, the key members of the Governments of the Claretian Provinces of Iberia: the host Bética, Cataluña, Euskal Herria, Portugal and Santiago.

The meeting conducted a discernment regarding various aspects of the lived reality in the region to seek responses from the common missionary vocation.

An important dimension of the reflection made these days was the commitment for Justice, Peace, and the Integrity of Creation (JPIC). For this they relied on the presence and illumination of Bro. Arnel Alcober, CMF, in charge of the respective General Secretariate who brought forward its reason for being, the realities, and challenges in this area.

Bro. Arnel brought forward the commitment to JPIC is an integral part of our Claretian identity, spirituality, and vocation. The principal lines of action were spelled out in the 2006 Claretian JPIC Encounter Notebook which took place in Morogoro (Tanzania) in 2006 and, in addition to the General Chapters of the Congregation; this commitment was reaffirmed by the Major Superiors of Colmenar Viejo, celebrated in September 2010.

Later the participants were able to study those elements which subsequently were made in the summary.

By working in groups the Encounter was able to seek common ground around three themes: the perspective of the Congregation with respect to Europe, an evaluation of the functioning of Iberia and its relationship with CEC (Confederation of the Claretians of Central Europe), and the relationship with the Claretian Family. Among practical themes they also dialogued on the publication of the “The Claretian Mission” magazine put out by the General Curia but whose printing, going forward, has been left to the responsibility of the provinces and/or delegations.