Missionaries and communities evacuated because of floods 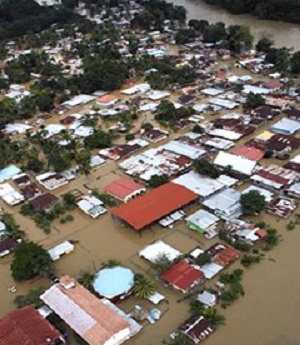 Darién, Panamá. The region of Darién (Panama), which boasts one of the most emblematic of Claretian missions, has been disproportionately affected by rains that caused rivers, such as the Chucunaque, the Tuira and its tributaries, to overflow. The number of people affected has exceeded 13,000. There is talk of at least 10 dead, several missing, about 3,000 houses damaged and the main roads flooded and cut off. The authorities have declared a state of emergency.

Fr Rodolfo Morales CMF, Provincial of Central America, gave us his perspective: “they have had to evacuate most of the population, first by boat (the whole area has become a lake that has covered the road, the river and everything around it) and then by truck to Metetí. Amongst the evacuees were the Sisters and Father Vicente Sidera, who had just returned to Darien. The rest of the population will be evacuated this afternoon or tomorrow. Only the police and some other people will stay to look after what is left behind, including Fr Enrique Garcia.We are very grateful for the emails expressing solidarity with the community in Darién, and we send our greetings to the Claretians. Some have phoned us in Yaviza, and given encouragement and joy not only to the Claretians but also to the people with their greetings and expressions of solidarity.
Once communication is restored with Darien, which may take several days, we will take appropriate aid, both from the National Shrine of the City of Panama, as well as from the Provincial Government.Let us all feel solidarity with one another as Christmas draws near. ”