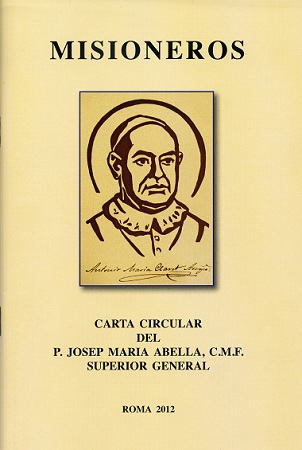 Rome. Fr. Josep M. Abella, CMF, Superior General, has written the Circular Letter “Missionaries” on the occasion of the first-half of the sexenium in which this General Government was elected.

Fr. General remembers and comments on various important aspects which were given to us at the last General Chapter to renew our missionary life. On this occasion he does it from the perspective in which he offers us that which is most central to our vocation: to be missionaries and be them specifically for today.

In his introduction Father General affirms that it seemed convenient to him to share with all the Missionaries of the Congregation certain reflections around this very crucial theme so that we may continue writing the congregational history with a language that is truly missionary.

The letter dated in Rome, the 13th of August 2012, the Festivity of the Blessed Claretian Martyrs of Barbastro, the Day of martirial memory in the Congregation. In addition to Spanish, the Letter has been translated into English, French, German, Portuguese, and Italian to be sent to each Missionary.