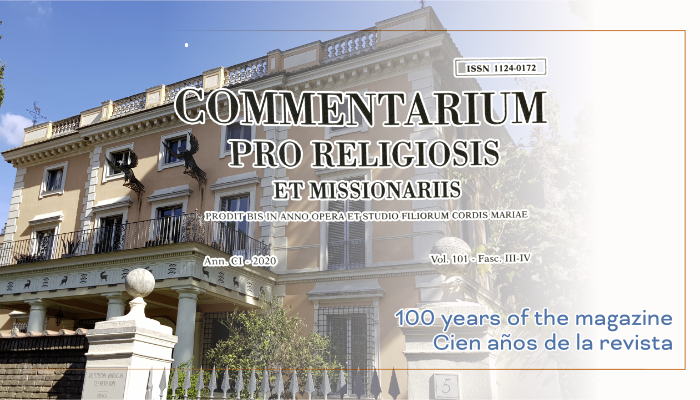 Rev. Fr. Felipe Maroto, who was Superior General from 1935 to 1937, with other Claretian jurists, began this magazine in 1920, three years after the promulgation of the Code of Canon Law (1917), in the elaboration of which Fr. Maroto himself participated.

The purpose of the magazine was to comment, deepen, form, and inform about the ecclesial and extra-ecclesial norms that have an impact on the way of life and apostolic activity of religious and missionaries. The universal law proper to institutes of consecrated life and societies of apostolic life, together with the norms given for mission territories, has been the main object of its articles.

In its century of existence, in its four annual fascicles – besides the founders, Felipe Maroto and Siervo Goyeneche – other distinguished Claretians have collaborated, namely: Cardinals Larraona and Tabera; Fathers Anastasio Gutiérrez, José B. Fuertes, Javier Ochoa, Luis Díez, Ignacio Ting Pong Lee, Cayo Gorricho and Aldo Cooper, to mention only those already deceased. And alongside them, other prestigious jurists have published high-quality articles.

The magazine has published more than two thousand studies aimed at both specialists and less experienced publics, as it has used a balanced methodology, alternating the dissemination of relevant legal documentation and historical research of interest, with doctrinal commentaries and answers to practical queries or controversial current issues that, by various means, reach our Legal Institute.

Unlike many specialized magazines that have disappeared, Commentarium has a number of subscribers similar to that of the magazines of the sector, it reaches almost all the Faculties of Canon Law and specialized libraries, Dicasteries of the Roman Curia, many diocesan curias, and religious Congregations. It also maintains an exchange with almost two hundred other magazines.

To commemorate this jubilant anniversary, the index of the last fifty years has been published in the centenary issue. The index of the first fifty years appeared in the fiftieth volume of 1969. The editor of the magazine, Fr. Aitor Jimenez, has informed that work is underway to introduce these indexes in the editorial web page (www.ediurcla.it) as well as the online publication of the magazine.

As the Superior General writes in his article in the commemorative issue of the magazine, we must give thanks to God for the work done and wish that Commentarium may continue to develop and even strengthen its commitment to evangelization and the formation of new evangelizers.