PERPETUAL PROFESSION AND ORDINATION TO THE DIACONATE IN MENDOZA 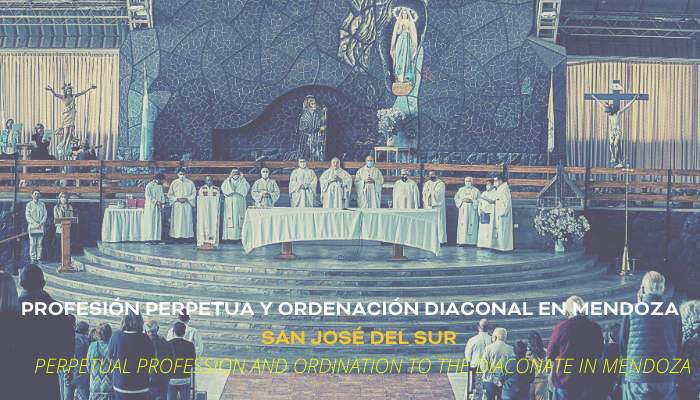 Mendoza, Argentina. On Saturday, October 9 at 18:30 hrs the Claretian missionary Daniel Ortiz, with the presence of the provincial government headed by the Provincial Superior, Father Mario Gutiérrez CMF, and several brothers of our congregation coming from Buenos Aires, Córdoba, Mendoza, and Chile, made his perpetual vows in the Sanctuary of Our Lady of Lourdes of El Challao in the city of Mendoza, with the presence as his witnesses the presbyters Carlos Soria CMF and Gustavo Verdugo CMF.

In this important celebration that marks a milestone in his formation process, our brother Daniel Ortiz was accompanied by his relatives, friends, and lay people with whom he had worked pastorally in different moments of his formation. All those present were very happy for this important step of his definitive consecration to God in our missionary congregation.

After the liturgical celebration, there was a fraternal sharing in the community hall, in which also participated various pastoral agents and servants of the Shrine, and which gave rise to the sound of zambas and chacareras, where those present expressed with affection and joy their greetings and good wishes for this significant moment in the life of our Claretian missionary.

The following day, Sunday 10, at 11:00 a.m. the diaconate ordination of the Claretian missionaries Francis Dan Valiente and Daniel Ortiz began, in a beautiful liturgical celebration presided by the Archbishop of Mendoza, Monsignor Marcelo Daniel Colombo, accompanied by the Auxiliary Bishop of Mendoza Marcelo Mazzitelli, the Provincial Superior of our Province of San José del Sur, Fr. Mario Gutiérrez, the Provincial Bursar, Fr. Gustavo Verdugo, who also officiated as master of ceremony, the Prefect of Formation, Bro. Fernando Kuhn, Prefect of Youth and Vocational Ministry, Fr. Jorge Cóceres, the Claretian missionaries of the local community of the Shrine of Our Lady of Lourdes of El Challao, the Claretian brothers and lay people who had traveled from different latitudes, relatives, friends and all the people of God who attended the Mass in the Shrine.

Around 1:00 p.m. a lunch was held in the community hall in which the relatives and friends of the new deacons participated with great joy together with all the Claretian missionaries, the lay people who had traveled to the beautiful city of Mendoza together with the pastoral agents and servants of the Shrine.

Undoubtedly this double celebration fills us with joy and hope, because we see in our missionary brothers, now ordained deacons to serve and accompany the People of God, the merciful face of our God, who endorses our prayers with generosity by giving us the grace of having two new workers to attend to his harvest. May the God of life and love bless our new deacons with a fruitful ministry, in which they can collaborate in building the Kingdom of justice, love and fraternity.