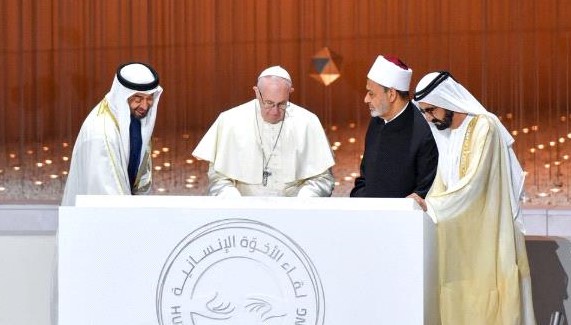 Abu Dhabi, United Arab Emirates. In the two thousand years of the Catholic Church’s existence, 3 February 2019 marks the first ever visit by a Pontiff to the Arabian Peninsula, also a first in 1,400 years of Islamic history. Remarkably, 800 years after St. Francis’ meeting with the Sultan of Egypt, the successor of Peter, Pope Francis met Grand Imam of the Al-Azhar University of Egypt in the Arabian Peninsula.

The three-day historical visit by Pope Francis to the UAE, which began on 3 February with a welcome by Abu Dhabi’s Sheikh Mohammed bin Zayed Al Nahyan at the emirate’s presidential palace, is part of the UAE government’s designation of 2019 as the “Year of Tolerance,” promoting openness to people and cultures from around the world.

The official welcome ceremony took place in the morning of the next day 4 February at the Presidential Palace grounds, described by the Vatican News as, “humble shepherd receives the welcome of a king.” It was with aerial acrobatics above the bay, with papal motorcade accompanied by over a dozen horsemen on beautiful Arab stallions, and with the presence of the officials of UAE.

In the afternoon Pope Francis took part in a multi-religious conference sponsored by the UAE-based Muslim Council of Elders, an organization aimed at promoting a moderate brand of Islam to counter religious extremism. It is an initiative created by Ahmed Mohamed Ahmed el-Tayeb, the Grand Imam of the Al-Azhar University in Egypt, a thousand-year-old center of Muslim scholarship and clerical training considered one of the holiest seats of Sunni Islam.

They have visited the Founder’s Memorial. And in a speech that Pope Francis delivered, he called for renewed efforts to end the “miserable crudeness” of war. Read full text of his speech here.

Pope Francis and the Grand Imam were also the first recipients of the Human Fraternity Award, presented by His Highness Sheikh Mohammed bin Rashid Al Maktoum

Mohammed bin Rashid announces the launch of the Human Fraternity Award. The first winners of the award are Pope Francis and Dr Ahmad Al Tayyeb, who have been honoured for their efforts in promoting world peace. pic.twitter.com/tMvv7ymfCC

Mohammed bin Rashid and Mohamed bin Zayed Al Nahyan have signed the foundation stone for the construction of a new ‘Church of Saint Francis’ and ‘Mosque of Grand Imam Ahmad Al-Tayyeb’ in Abu Dhabi. They will serve as beacons to uphold the values of tolerance, moral integrity and human fraternity in the UAE.

Mohammed bin Rashid and I have signed the foundation stone for construction of a new ‘Church of Saint Francis’ and ‘Mosque of Grand Imam Ahmad Al-Tayyeb’ in Abu Dhabi. They will serve as beacons to uphold the values of tolerance, moral integrity and human fraternity in the UAE. pic.twitter.com/ktrmpiZTBg

Pope Francis concluded his visit by presiding over an open-air mass attended by an estimate of 150,000 people at the Zayed Sports City Stadium. Those who were not able to get tickets watched the Mass on big screens outside. There was a large cross on the rear wall and in front a white statue of the Virgin Mary and the Christ child. The Mass was celebrated in nine languages and Pope Francis spoke in Italian during the homily. Among the crowd were Sheikh Nahyan bin Mubarak, the Minister of Tolerance, his son Sheikh Shakhbut bin Nahyan, UAE Ambassador to Saudi Arabia, and Noura Al Kaabi, the Minister of Culture and Knowledge Development.

In his homily, he talked about the beatitudes as a roadmap for life: “They do not require superhuman actions, but rather the imitation of Jesus in our everyday life.” Then Pope Francis compared the Church of the UAE to the ancient Church of Philadelphia, which Jesus addresses in the Book of Revelation. He then concluded by inviting all people of the United Arab Emirates, “to preserve peace, unity, and take care of each other, with that beautiful fraternity in which there are no first- or second-class Christians.”

He left UAE on the 5th of February with full of hope for humanity and the whole world.