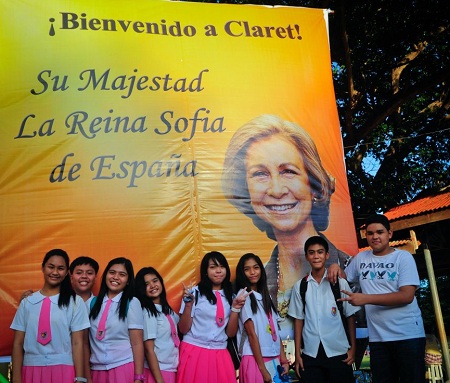 Zamboanga, Philippines. On July 5th Queen Sophia of Spain visited Colegio Claret of Zamboanga and the Katilingban para sa Kalambuan Inc. project, run by the Claretians of the Philippine Province.

During her official visit to the Philippines, Queen Sophia traveled to the island of Mindanao, one of the poorest regions of the archipelago, to learn about the various development projects supported by Spain.

In a special way she was interested in knowing about the Katilingban para sa Kalambuan Inc., project promoted by Fr Angel Calvo, CMF who, in an outskirt of Zamboanga, proposed to mitigate poverty, and promote understanding and peace between the Christian and Muslim communities.

The schedule of the queen in Mindanao included a visit to Claret School built with the financing of the AECID (Spanish Agency for International Cooperation) and the Spanish Federation of Religious of education.

At the School, the Queen was received by he Superior of the Community, Fr. Max Rodriguéz, CMF, and the Director of the School, Fr. Maurizio

Ulep, CMF, by the other Claretians, the employees of the school, and especially by the hundreds of children and enthusiastic young people who expressed their gratitude and joy to the queen.