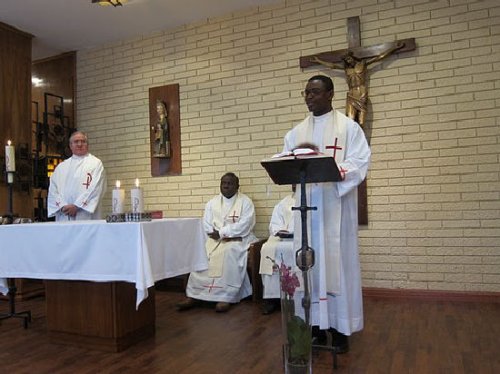 Colmenar Viejo, Spain. The second day begins with the celebration of Laudes and the Eucharist at 08:00 h. It was prepared by the Major Superiors of Africa. The celebration was prepared by Fr. Médard Kwango, Superior of the Delegation of Afrique Centrale, presided over by Fr. Simeon Nwobi, Provincial of East Nigeria, and Fr. Henry Omonisaye, Superior of the West Nigeria Delegation preached the homily.

In the first session, yesterday’s work is continued. Fr. Paul Smyth, the Moderator, proposes that, after a few minutes of reflection, the Major Superiors write in a sheet of paper the priorities that their respective Province or Delegation has in the light of the decisions of the General Chapter.

Then he invites them to gather by groups of geographic continents. Thus, five groups are constituted: one each from Europe, Asia and Africa and two from America (North and Centre, and South). The secretaries of each group present in the second morning session the priorities agreed by their group. Fr. Jose Anchupankil presents the priorities agreed by the group of Asia; Fr. Henry Omonisaye, those of Africa; Maxim Muñoz, those of Europñe; Alejandro Cerón, those of North America, Antilles and Central America; and José Abarza, those of South America.

It can be observed that the priorities agreed upon by the Major Superiors are in full accord with those of the General Chapter. All the groups, although with different nuances, depending on their concrete situation, have agreed in pointing out as priorities community life and spirituality / Claretian identity; initial and on-going formation, as well as vocational ministry; and the need to elaborate a good life and mission project. Several have also indicated the need to come to financial self-sufficiency. One of the participants, commenting on what has come out in the idea-sharing session, underlines that it is very important to be open to the universality of the Congregation and to assume the fact that the problems of some Major Institutes are not “exclusively” theirs, but are the concern of all.

In the afternoon, Fr. General tells the assembly that the entire General Government is responsible for the Plan, although in each area the corresponding prefect has a special competence. And, in the second place, that he is going to deal in his intervention with some points of the government section of the Dossier that was handed over to all the Major Superiors. He tackles the subject of the restructuring of the Major Institutes, the provincial projects of missionary life and the assignments outside of the province, the congregational projects for each continent, the guidance of the personnel and the coordination in the governance of the Congregation. At the appropriate moment in his intervention, he presents the current statistics of the Congregation. And he concludes with the information given by the General Postulator, Fr. Vicente Pecharromán, about the causes of our Blessed and Servants of God.

In the second afternoon session, by groups, these three questions are deliberated upon: 1. What impression have the points discussed so far aroused in you? 2. What questions need clarifications or explanations? And 3. What would the promotion and putting into practice of the points presented imply?

In the plenary session, all the groups stress the clarity and consistency of the information, the good reasoning given for the decisions of the government, without hiding the challenges and problems that the Congregation faces, the hopeful and dynamic vision of the Congregation.

In general the groups have recognized that putting into practice the points indicated is going to imply a change of mentality and of the model of community, universal vision of the Congregation, much dialogue and communication.

The evening prayer was prepared by the Conference of Africa (ACLA) and led by Fr. Médard Kwango.