TELL ME WHO YOU HANG OUT WITH, AND I WILL TELL YOU WHO YOU ARE.

Less than a fortnight ago I returned from a month-long Ignatian retreat. This time reminded me of an old proverb with which I decided to title this brief reflection on a topic that seems very obvious for any believer, but less so for a religious: “Tell me with whom you walk, and I will tell you who you are.”

The key word in this phrase is “to be”, not “to be”. Between “being” and “being” there is a big difference; the same difference that exists between “eating” and “eating sometimes” or “playing” the guitar or doing it sometimes. In this case it is about being with Jesus and before Jesus. And the safest place to find him on earth is not only in another person, but above all in the Blessed Sacrament where he is present.

The place where I lived the retreat was the convent of the Sisters of the Great Commendation, whose charism is the accompaniment of the retreatants, as well as the continuous adoration of the Blessed Sacrament. In practice, the Lord Jesus is NEVER alone in the chapel, there is always someone with HIM.

Wittingly or unwittingly, I also began to live this rhythm, so I began to “be” with HIM regularly. After a while, two truths came to me: one sad and one joyful. The sad truth made me realize that, until now, unfortunately, I was only “being” with the Lord Jesus and, of course, I had a lot of valid and logical arguments to justify myself. The joyful truth was that I saw how my heart began to conform to the Heart of Jesus, through regular/daily and even more frequent “being” with Him. And this was not easy at first; even for me as a religious and priest who celebrates the Eucharist every day. And for this I needed time; because it is completely different with God than with people: sometimes you become disillusioned with people the more you get to know them because there are no visible flaws at the beginning. However, with God the opposite happens: the longer you are with Him, the stronger you fall in love. You just have to overcome that first time of weariness and discouragement.

It was then that I remembered the proverb “Tell me with whom you walk and I will tell you who you are”. It is impossible to be like Christ when He occupies a marginal place in my life, when I meet Him irregularly, when I do not consult Him about plans and decisions, when everything else becomes more important than Him.

Finally, I would like to tell you the story of the monastery in which I was and which was totally financed by a rich man who dreamed of a place where Jesus Christ would be adored without ceasing. This was the second stage of the dream he had since several years before, he had built a chapel on the grounds of his company for him and his employees to pray. Then, a few miles from his company, he built a second chapel which is where perpetual adoration of the Blessed Sacrament takes place and where the employees of his company can sign up for “on-call service” and adore the Lord Jesus as part of their work. He has recently built the aforementioned monastery and some skeptics say that probably even non-believers and non-practicing people use this time not to work. However, I believe that the time when we abandon ourselves to Jesus is never wasted and that He does His work, even if people’s intentions are not entirely pure. I get the impression that this gentleman also knows the saying “tell me who you hang out with, and I will tell you who you are” and how important it is who that “who” is.

Try to stay in front of HIM for an hour… 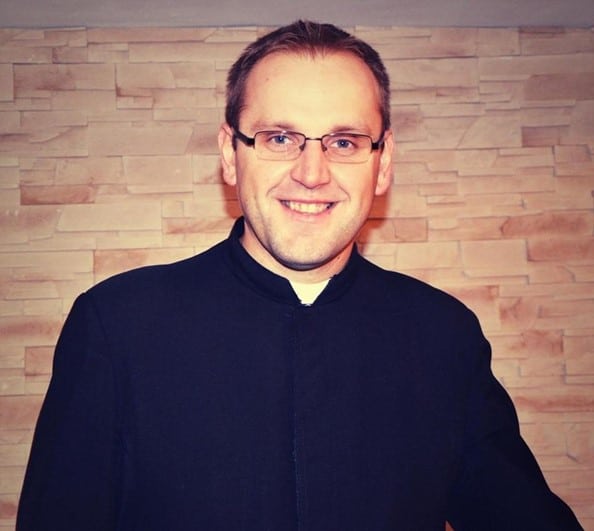