Thanksgiving for the Beatification

Barcelona, Spain. On Sunday morning, 22 October, the beatification acts of 109 Claretian martyrs with a Thanksgiving Mass at the Shrine of the Heart of Mary of Barcelona have been closed. The Eucharist was presided over by the Archbishop of Barcelona, Juan José Cardinal Omella, concelebrated by the Superior General, Fr. Mathew Vattamattam, twelve Claretian bishops from around the world who also participated in the beatification and more than sixty priests. 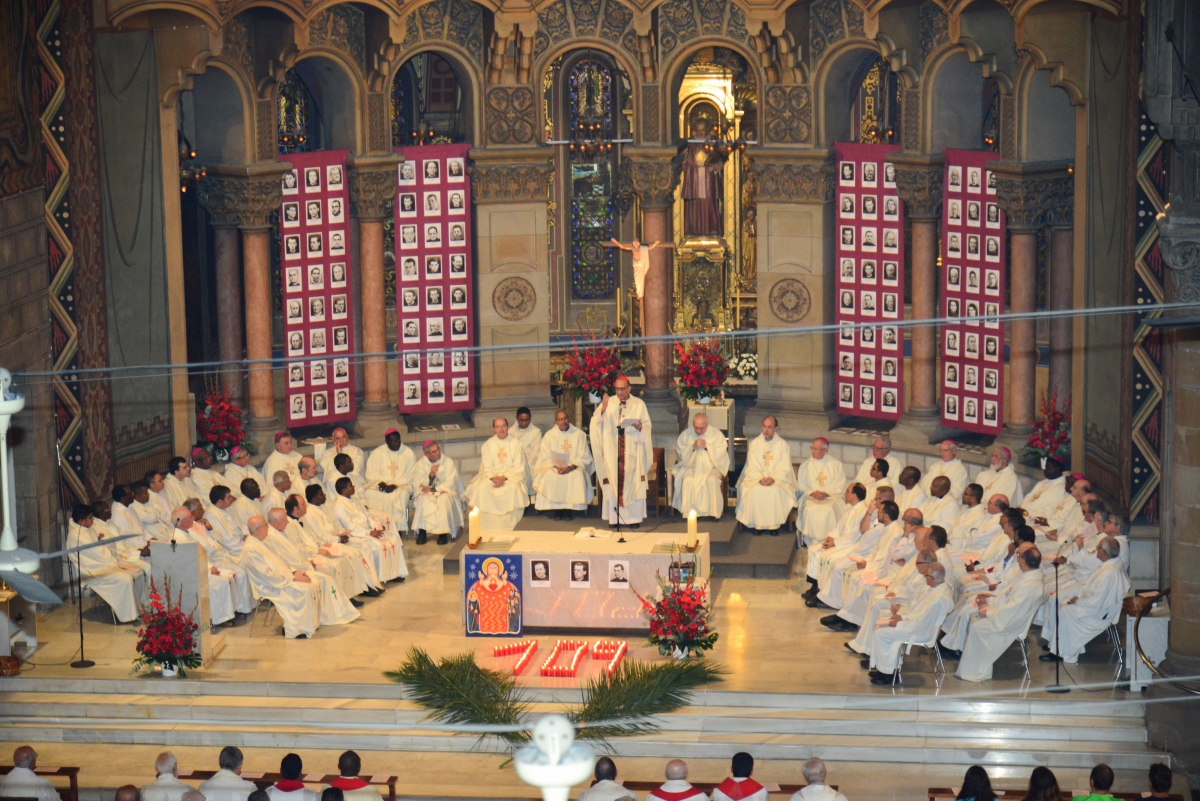 Cardinal Omella reiterated the message of forgiveness and reconciliation that was emphasized yesterday in the celebration in the Basilica of La Sagrada Familia and the call to an absolute trust in God in the face of difficulties. “Do not be afraid to face the difficulties of the present time because, through events that often overwhelm us, God is directing human history to its fullness.” The cardinal reiterated that “love overcomes hatred and no difficulty or persecution can take away the joy of confessing Jesus“

He also called on the Claretians to continue collaborating “with all who strive to build a more just and united world, including political authorities, but do not forget that the heart belongs only to God.” That is why he has asked for an absolute surrender to God: “Do not let yourself be caught by political ideologies or other modern idols who claim our absolute surrender. Only to God we must give what is of God. This will give us great freedom of spirit. “

The cardinal has emphasized the martyrial story of the Claretian Missionaries that in just over 150 years of history it already has 183 beatified martyrs of the 270 Claretians killed: “The beatification of yesterday was, in a certain sense, the definitive reconstruction of 109 broken lives for confessing Christ in circumstances we would never want to repeat.” He insisted that “beatification is not an adjustment of accounts with the past but a song to the infinite grace of God and an invitation to be his witnesses in our world.” “Saints always look to the future,” he concluded.

The celebration coincided with Sunday that the Church celebrates the World Day of the Missions, one of the charisms of the Claretian missionaries. The motto that has presided over the acts of beatification is “Missionaries to the end”. The collection of the Eucharist this Sunday has been devoted to the projects of the Domund.

The Mass of Thanksgiving has begun with a procession led by the reliquary containing the relics of the martyrs that was venerated yesterday in the basilica of the Sagrada Familia. Also placed in the altar the original icon that was unveiled yesterday that represents the 109 blessed martyrs.

At the end of the Eucharist, the Provincial of Catalunya, Fr. Ricard Costa-Jussà, expressed his words of gratitude and recalled that “the motive and cause of our gathering is the example of fidelity of the 109 martyrs “. In addition to all the Claretians involved in the organization of events, the Provincial especially thanked Cardinal Omella for the fact that the archbishopric of Barcelona “opened the doors to the celebration and allowed to use the facilities of the precious Basilica of the sagrada Familia to celebrate the beatification.” The Claretian missionaries have given the diocese a reliquary of the new martyrs.

Finally, Father Mathew Vattamattam recalled the three words that have marked the celebration: “Gratitude, joy and fidelity”. Father General reminded everyone that “in going back to our places of origin we carry with us the impulse of the Gospel that led our brothers to be faithful to the end.“