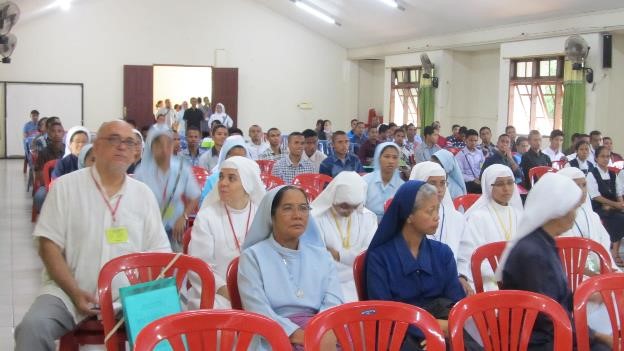 Kupang, Indonesia. Following the invitation of the universal Church to gaze in a special way on the life and the presence of the poor, while at the same time to build a culture of encounter with our fellow co-journeyers, the Claretian Missionaries of Independent Delegation of Indonesia – Timor Leste held its 8th Religious Life Week forum from 18-20 January 2018, reflecting on Poverty as the main theme.

Using the “See-Judge-Act” method as framework, the presentations were easily grasped by the participants. On the first day, the reflection was focused on “seeing” the context and reality of poverty in Indonesia in general and of East Nusa Tenggara (NTT) in particular. Ms. Emiliana Nomleni, from the Local Government, gave a panoramic picture of the reality of poverty and the role of government in overcoming the problem. The reflection of the day ended with the presentation of Fr. Inosensius Sutam on the cause and socio-cultural impacts of poverty in one’s life before culminating in the mass of the day.

During the second day, the keynote speakers led the forum in “judging” the issues, contexts, and reality of poverty in the light of Judaeo-Christian Tradition. In the first session, Fr. Agustinus Supur, cmf gave a reflection on, “Poverty as a Way and Aspirations – Few notes on Poverty in the history of consecrated life.” The second day’s exploring ended with the insight on “Evangelical Poverty in Consecrated Life,” given by Fr. Inosensius Sutam before proceeding to the celebration of the Holy Eucharist.

The third day was dedicated on “acting” the spirituality of poverty. Representatives of four different congregations shared their day to day experience in living out the spirituality of poverty according to their Congregation’s Constitutions and Rules and how they become co-journeyers with the poor and the marginalized in their respective apostolates.

Almost two hundred participants attended this years’ event. They were so happy and grateful to the Claretian Missionaries for arranging such an important program possible. Fr. Francisco J.B. Roca CMF, during the concluding mass, inspired by the readings of the day, invited the consecrated men and women to be a little “crazy” in witnessing our very identity as consecrated people in this rapid-changing world. Before the mass ended, Fr. Romaldus Nairun CMF, Coordinator of the Committee of Consecrated Life, thanked the keynote speakers for their availability. Likewise, he thanked the members of Seminari Hati Maria community, Claret Novitiate Benlutu community, the Claretian Youth and other communities for their direct support in making this event successful. The participants went home carrying a great dream and hope in mind, to “love not in word or speech, but in truth and action” (1Jn 3:18).