The ‘Religious Book’ Looks Toward the Future 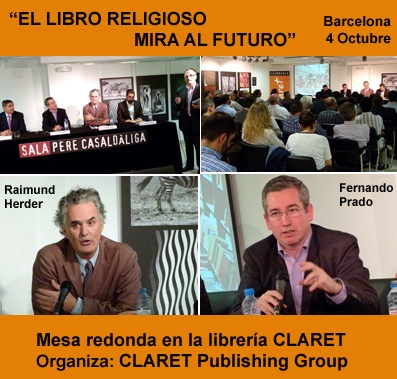 Barcelona, Spain. On the 4th of Octoboer, on the occasion of the BOOK Fair held on October 3-5 in Barcelona), the Claretian publications (“Editorial Claret” of Barcelona and “Publicaciones Claretianas” of Madrid) organized a interesting conference around the theme entitled: “The Religious Book Looks Toward the Future”.

Numerous attendees were welcomed by Marceli Lopez, editorial director of “Editorial Claret” in the “Pere Casaldaliga” hall, giving the event a family feeling.

Among those attending were the most important religious book publishers in the Spanish-speaking world, such as “Herder” and “Divine Word”, as well as numerous distributors and magazines.

The theme and the circumstances became a natural attraction for the attendees, essential agents of Catholic culture and evangelization.

In the dialogues, interesting points of view on the future of religious books were offered, and important questions expressed which will require further analysis.