THE TRACES OF THE PATH, TROD BY THE PROVINCE OF CHENNAI 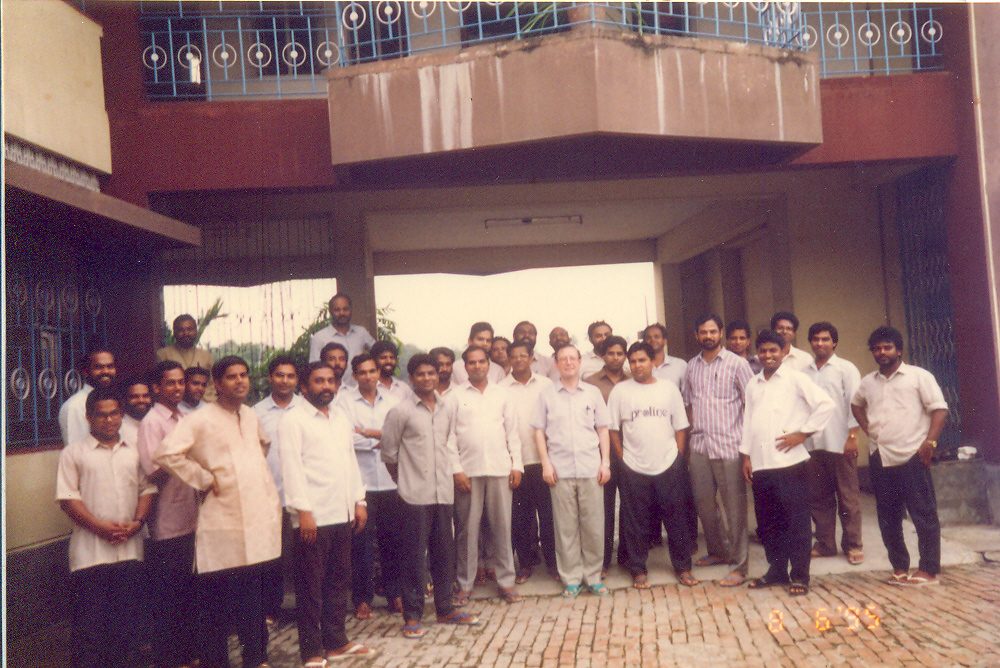 We gratefully remember the paths our Province of Chennai had journeyed for the past twenty five years. It is a jubilating moment to look back our history and count the blessings of the Lord in the proclamation of His word and to learn lessons to march forward effectively to radiate the joy of the Gospel.

THE EMERGENCE OF THE PROVINCE 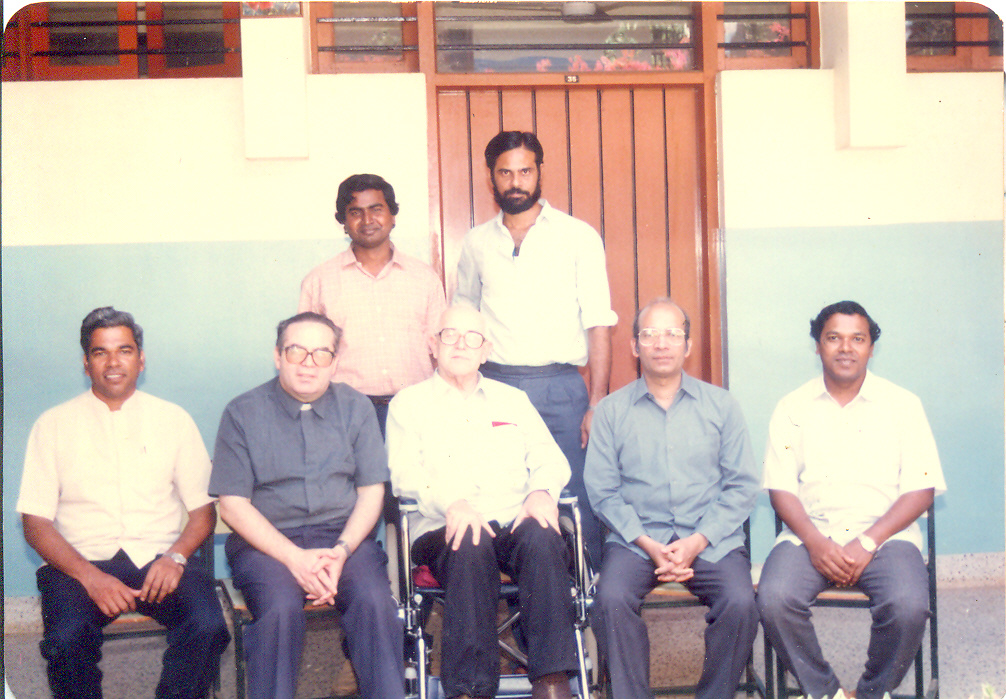 In 1992, the general government raised this as an independent delegation, naming it “Indian Delegation of Claretian Missionaries.” The delegation continued to be administered from Karumathur.

On 9th November 1993, the general government announced the elevation of the Indian delegation of Claretian missionaries to the status of a province in formation. Fr. S. Anselmus was appointed as the provincial superior. The newly formed organism was named as “MADRAS PROVINCE OF THE CLARETIANS.” The first Provincial Chapter of the Province was convoked from 14-20 April 1994 at Claret Illam, Kumbakonam presided by Rev. Fr. Peter Schutz, Vicar General. Fr. S. Maria Arul was elected as the Provincial Superior and Fr. S. Devadoss as Prefect of Formation, Fr. J. Remigius as Prefect of Apostolate and Fr. Arthur H. D’Cruz as Prefect of Economy. On 11 June 1994, the Provincial Curia was shifted from Claret Bhavan, Karumathur to Anna Nagar, Chennai. As the City of Madras was renamed as Chennai, the name of the Province of Madras was also changed into Province of Chennai in 1997.

THE INFANTILE STAGE OF THE PROVINCE

The Province of Madras initially had 35 priests, 55 students and 5 novices who were fully glowing with the fire to set the world on fire with God’s love. It was the initiatives of these young men that laid the foundation for the missions, formation centers and social apostolates for the Province of Chennai. In view of preparing the future missionaries, the province had four formation houses (two in the South India – Claret Bhavan, Karumathur and Claret Illam, Kumbakonam and two in the North India – Claret Nivas, Barrackpore and Claret Vidyaniketan, Ranchi). The first formation house in Tamil Nadu was Claret Bhavan, Karumathur, which was established in 1976. Thus it is considered to be the Mother House of the Province. 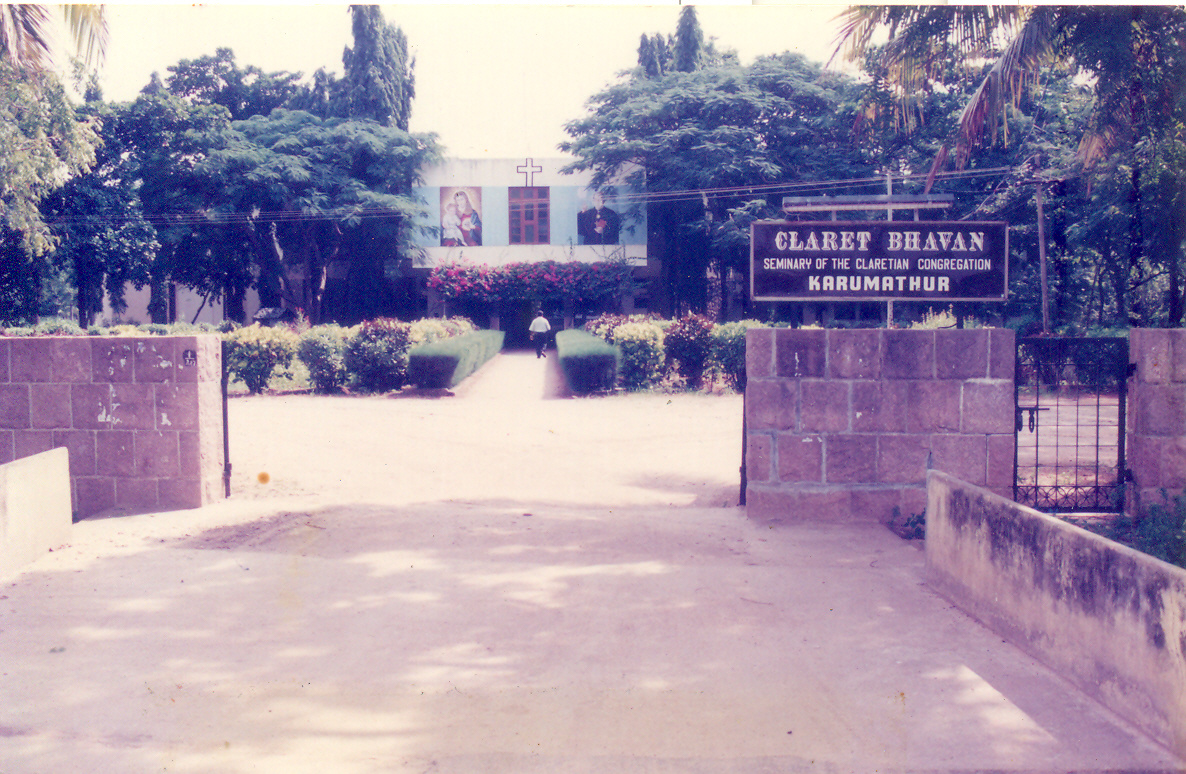 Meanwhile the province also had ventured into the fields of pastoral ministry. At the preliminary stages, the province had three parishes in Tamil Nadu and a mission center in Rajipur, West Bengal. On 24 october 1978, the first ever Indian Claretian mission parish namely St. Anthony Mary Claret’s Church, Karumathur was erected and Fr. Mathew Njayarukulam was appointed as its first parish priest.

On being called to be the prophetic servants of the Word and to respond effectively and timely to the Gospel values, the province started its social apostolate in working for the eradication of the social evil and transformation of the society. The first Social apostolate of the Province is the “MERCY HOME”, the brain Child of Fr. Francis Drinberger. It served to fight against female infanticide and still continues to work for the emancipation of women in that vicinity. The contribution of Claretians of the Province of Chennai in the field of Arts and Media too emanated in 1988 through CLARA (Claretian Arts Association). It served as the mode of communicating God’s message through music and print media. 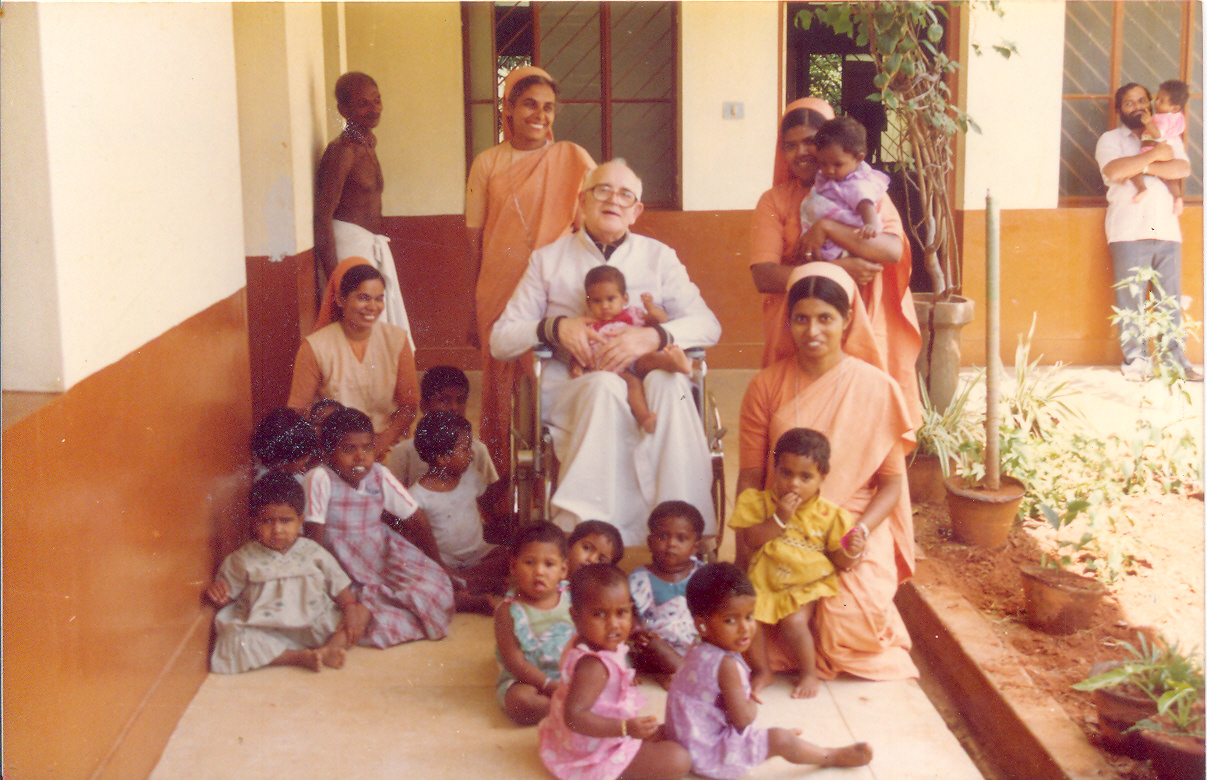 THE TRACES AND GRACES FROM THE PATH TROD

Though these are the initial seeds of the province, the shoots of them have spread so rapidly in these twenty five years. At present the Province of Chennai has nearly 152 priest and 37 professed Students. The Province of Chennai had been the cause to mark two different organisms that are emerging right now. The missionaries from this organism established the first mission in Musoma, Tanzania in 1994 which, along with other Claretian mission centres in East Africa, became St. Charles Lwanga independent delegation. Similarly, Kolkata Dependent Delegation also is an outshoot of the Province. Kolkata Dependent Delegation was started in the year 2008. The initial light bearers were Rev. Fr. Michael Pandian as the Delegate Superior and Frs. John Kenney and Lord Winner as the consulters of the Delegation. At present it has also initiated the process of becoming Independent Delegation. All these are the outshoots of the Province of Chennai. 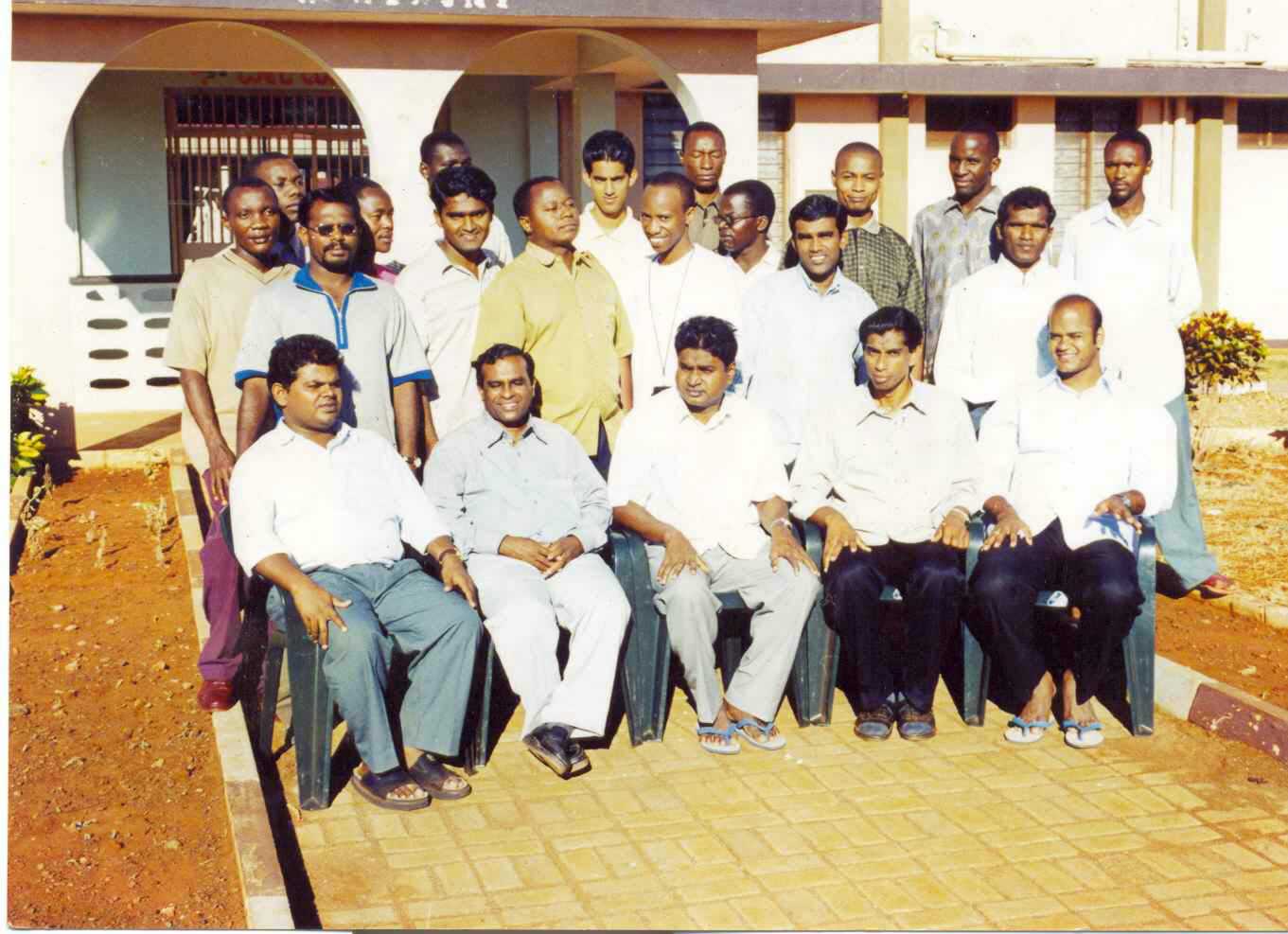 Our Mission In Tanzania

“My Spirit is for the Whole World” is the famous dictum of our father Founder. Bearing these words of our founder, the province has ventured into different mission endeavors within these twenty five years. The fruits of them are vividly seen in the missions and missionary zeal of the members of the Province. The province is rendering its pastoral service in 16 Parishes (9 in Tamil Nadu and 7 in North India). In order to prepare the future missionaries, the Province has 04 Formation houses (2 in Tamil Nadu and 2 in North India). In order to work for the Social Transformation, the Province has initiated in the recent past four different centers for prolife ministries. They are MANASU (Mana Nala Sugalayam) a home solely working for rescuing wandering men with mental illness, recovering, rehabilitating and reuniting them with their families. It is a new venture of the Province; this has reached throughout India. Indeed it gives re-life to the person, an axial that reverberate the life of the person again. Another important mission is ASSISI CARE HOME, a home meant for the HIV infected and affected children, and indeed it adds meaning into the lives of the children to grow with the competent spirit to cope up the challenges of time. Besides these ministries the Province also has created a center for alternative therapy and to give life to the dying cultural folks (KAVASM). It serves as a centre for the emancipation of the natural and traditional medicines and preservation of the cultural elements. In the Northern part of India, the Province has also involved in educating under privileged Tribals through vocational training centers (CIET, CVIT). These centers empower them to socially prove their status through their competent field of expertise.

Education is the premise of progress in every society and family. In order to dispel the darkness of ignorance and work for the progress of the society, the Province had started Schools. The province has 13 schools (9 in Tamil Nadu and 4 in North India). They work to form responsible citizens with intellectual proficiency, social skills and spiritual strength. The schools in north India stands as a beacon for the Tribals for their emancipation. Imbibing the Missionary Spirit of Fr. Claret, being Listeners and servants of the Word of God, the province has involved with more enthusiasm into the field of Communication to spread the Word of God through means of Bible Diary and Publications. It has reached the nook and corner of State facilitating the active participation of people in liturgy. 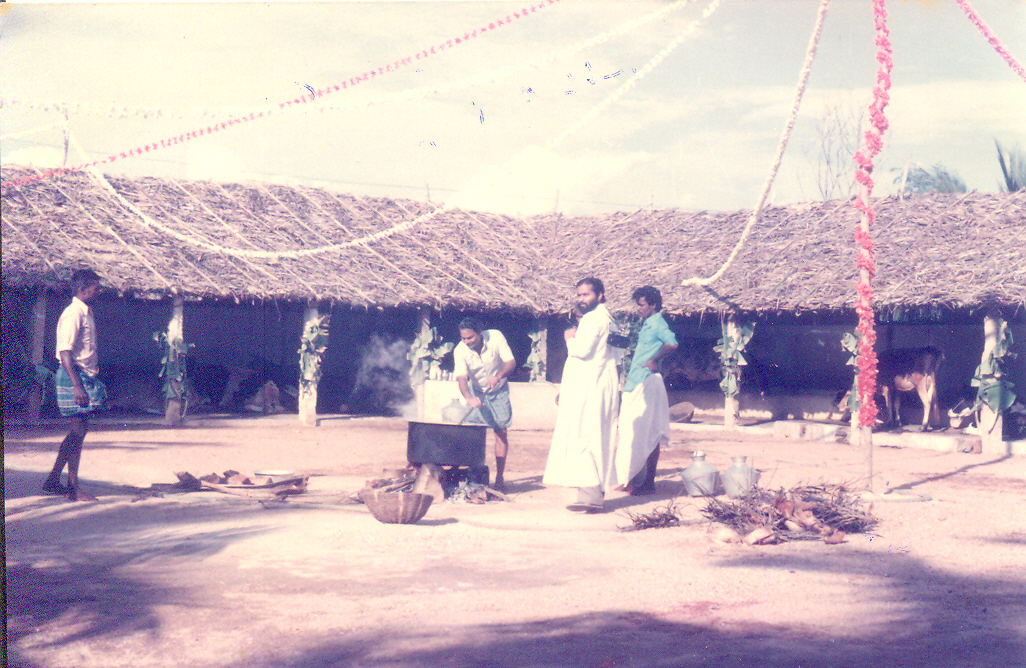 Laity is one of the important pillars in the growth of the church. Having observed the growing commitment of the laity and the need of their leadership in the life of the church, the province has taken up a special mission of forming the lay evangelizers for the proclamation of the Gospel. LIFE (Laity Institute for the Formation of Evangelizers) is an initiative of the province to form the lay evangelizers. It has reached out to very many people who long to hear the Word of God. Amaidiagam (Ashram) is a budding ministry of the province to quench the awakened spiritual thirst among religious and laity. It also serves as the ecumenical center to gather people to work together to reach the eternal reality.

One of the greatest graces of the Province in these years of its growth is that it has prepared its personnel to spread the Gospel far and wide towards the universal mission. There are almost 26 members of the province who have been serving in other organisms to serve the congregation globally. It speaks of the Province and its openness to send the missionaries on mission. The new mission that the Province has recently taken up is the mission in Malaysia. It has a rampant growth in few years of time; the tireless ministries of the missionaries have made other dioceses to invite the Claretians to spread the Gospel in their dioceses as well.

The Province gratefully acknowledges the Presence, guidance and the abundant graces of God it has been receiving in these years through the efficient and zealous missionaries and for the rampant growth of the province in various parts of the country. The best thing to hold onto in life is each other; the province has witnessed the communitarian spirit which enabled the missionaries to venture into difficult parts of the country to create missions for the spread of the Gospel. We have still miles to go in our missionary endeavors. May the spirit of our Founder St. Anthony Mary Claret guide us to brighten the lives of many.