To serve the People of God, the Congregation celebrates the ordination of seven missionaries 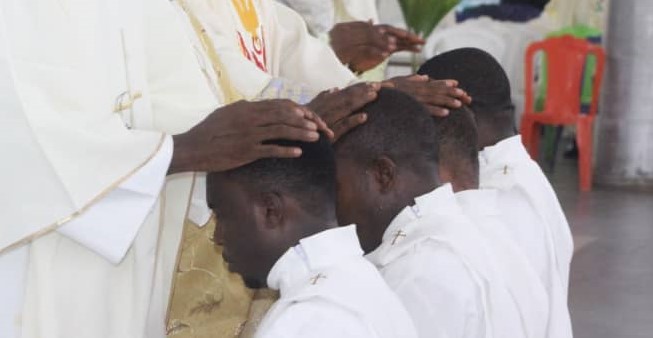 December 21, 2020. During this weekend, we, the Claretian Missionaries, congratulate ourselves for the admission of seven missionaries, six priests and one deacon, to the sacrament of Holy Orders in different parts of the world.

In the Independent Delegation of Padre Xifré, the Claretian missionary deacon Higinio Bahé was ordained in the city of Luba, by Rev. Fr. Juan Nsue Edjang Mayé, Archbishop of Malabo.

In the Province of Fatima, deacon José Enrique García Rizo was ordained in the parish of St. Anthony Mary Claret of Sevilla, by the hands of His Eminence Cardinal Aquilino Bocos Merino, CMF.

In the Province of Santiago, the student Jorge Ruiz Aragoneses was ordained deacon on Sunday, December 20, in the parish of St. Anthony Mary Claret of Madrid, by the hands of His Eminence Cardinal Aquilino Bocos Merino, CMF.

These ministries can well be understood by paraphrasing one of Cardinal Bocos’ recent homilies: to relate to the Father as His sons, to listen to His Word and to serve His People. Let us never cease to rekindle our love for God and His People!