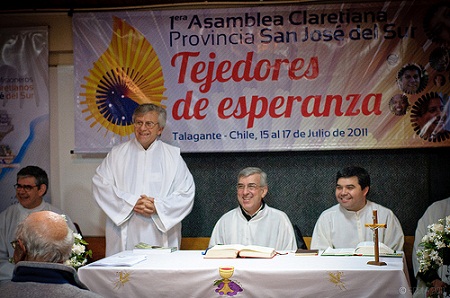 Talagante, Chile. From July 15 – 17 the New Province of “San José del Sur” celebrated their 1st Assembly at the ‘Casa de Encuentros y Formación Padre Claret’ in this city.
The theme for the encounter was: “Weavers of Hope”.

Presiding at the Assembly was Fr. Josep Ma. Abella, Superior General of the Congregation, enjoying the participation of some 40 missionaries representing the communities of Argentina, Paraguay, and Uruguay, together with more than 20 from Chile and numerous laity who have responsibilities in the various pastoral ministries of the Claretian apostolate. Also participating was Fr. Félix Martínez, Provincial of Bética, who until now the Mission of Humahuaca depended, and Fr. Manuel Tamargo, Provincial of Santiago, who until now was responsible for the Mission of Paraguay.

Various social realities which gave rise to the new province were studied in order to direct the missionary response by means of the Provincial Project.

The high point of the Assembly took place on Saturday, July 16th with the installation of the interim government team. At the head, as first provincial superior, is Fr. Mario Gutiérrez Medina, accompanied by his consultors: Fathers Juan José Chaparro Stivanello and Gustavo Larrazábal Volpe, both Argentinians, Joaquín Medina Romero, until now the superior delegate from the Claretian communities of Paraguay, and Alonso Sánchez Matamoros, for a long time employed in the missionary communities of Humahuaca in the north of Argentina. (Fotos)