Sixteen months remain before the start of World Youth Day in Lisbon. The Preparation Commission is still working on all the preparations. To know how things are progressing we interviewed Fr. João Luis Escaleira, coordinator of the event and Prefect of YVM of the Province of Fatima.

Is there already an official date for the WYD in Claretian Family?

Yes, last February we were able to know the official date of the WYD in Lisbon, so we have already established the days in Claretian Family. We will meet in Carvalhos (from July 28 to 31); then in Lisbon (from August 1 to 6), and we will finish together in Agualva-Cacém (from August 6 to 8).

What stage of work are you at?

We have been working more systematically on the preparations for WYD since last August. Currently, we are about twenty people distributed in three commissions (organization, animation and communication) that have regular meetings and we are making progress in a common planning. WYD is a worldwide event that involves the whole Claretian Family, even if it is up to us to prepare it at this time. All the Branches have made an option for it to be “the event” par excellence of the new ClaretWay World Youth Network, so we are walking along this line. We are defining many things as we go along, since we do not have any precedent of this new approach (we remember that ClaretWay was officially launched last October).

For the moment we have met with YVM managers from America, Europe, Africa and soon we will meet with Asia. We are still on the move. We have asked the places for a first estimate of the number of participants for the month of June. With this information we will be able to adjust the budget even more to start confirming certain services with different suppliers.

Do you have any message you would like to send to those responsible for Youth Ministry in the Congregation?

First of all, thank you for the work you are doing in your places, we know that most of them have started the preparations. We would also like to remind them that we are available at the e-mail address jmj23claret@gmail.com, as well as the space we have set up with questions and answers for them: https://judicious-april-7e1.notion.site/Responsables-PJV-JMJ-ClaretWay-62eb7b371835432da9f1205ba6181c06

And finally, we invite you to subscribe, if you have not already done so, to the newsletter that we send every month to prepare all of us together in this journey. We do three newsletters: one for volunteers, one for participants and one for them, those responsible for YVM at any level. It is in English, Spanish and Portuguese (and may soon be available in French). The link is as follows: http://eepurl.com/hSlHbn 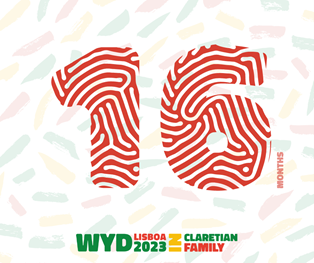