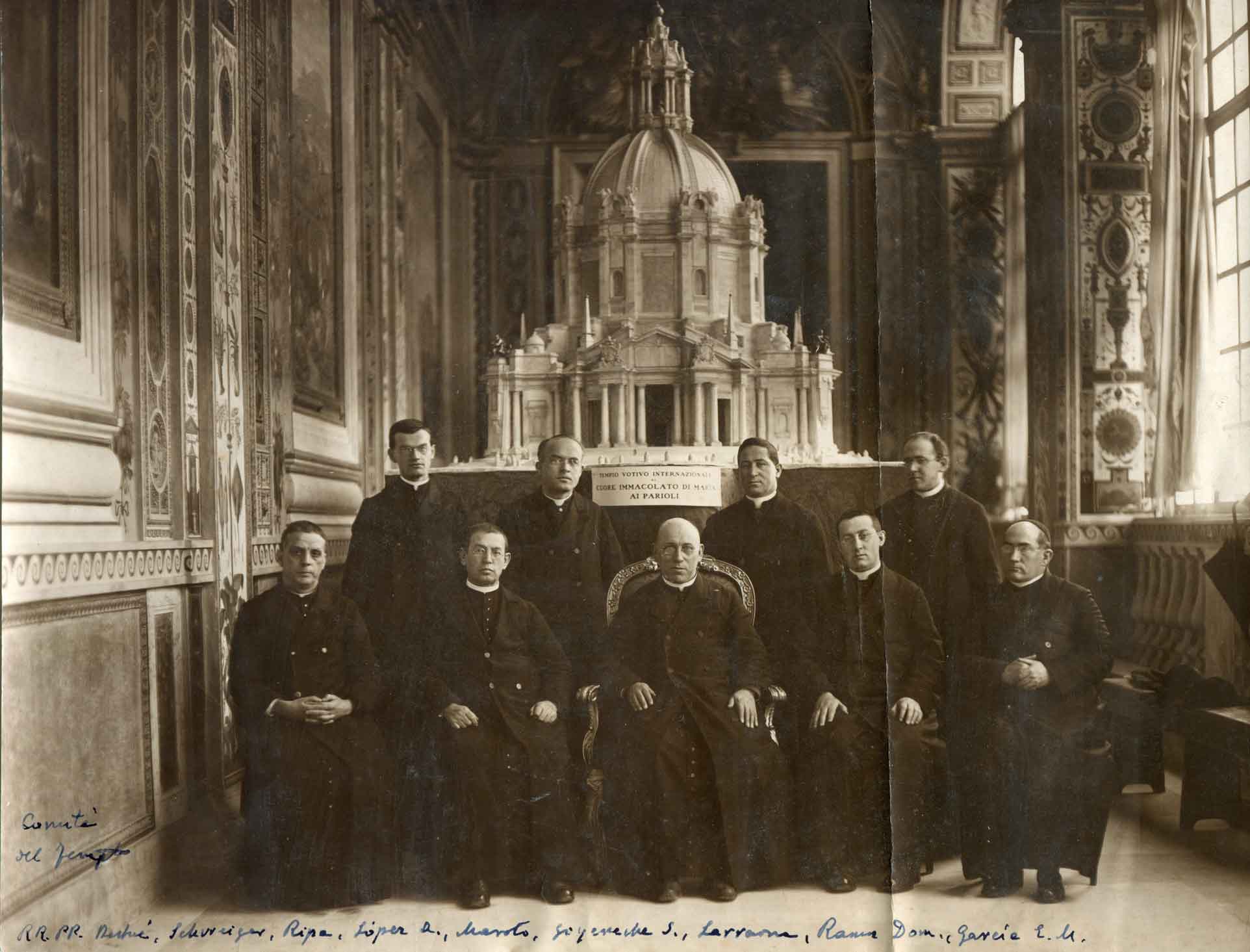 In August 1922, the XII General Chapter of the Congregation met in Vic. In Session number 42, September 6, the following was decided: “Regarding the offer made by the Supreme Pontiff to the Congregation (15. 000 m2 in the Parioli area of Rome to build a temple to the Heart of Mary), the Chapter unanimously accepted it publicly for the following reasons: 1st the generosity of the Supreme Pontiff Benedict XV; 2nd his desire and that of his successor Pius XI that we accept and undertake the work; 3rd that the church itself would help us; and 4th that this imposes on us no civil but only moral obligation to do it as and when we can.”[1].

It would be necessary to start from the beginning by introducing a figure, Baron Carlo Monti, General Director of the pro cult fund, who in his frequent visits to Pope Benedict XV, of whom he was a close friend, repeatedly expressed to him the idea he had conceived and the desire of his heart to erect in the city of Rome a votive temple dedicated to the Blessed Virgin, Queen of Peace. In 1917 the company Quartiere Valle Giulia, owner of a large part of the land of Monti Paroli, had resolved to offer the Pope some undetermined plots of land to build a church. These plots of land would be determined whenever the Holy See had a project for the construction of a sacred building. This would indirectly bring the company a benefit, since it would mean a revaluation of its land. Baron Monti himself, who had known the architect Armando Brasini through the dome project for the church of St. Ignatius, offered him the doors of the Vatican.

Brasini, who had intervened in the foundation of the Society Quartiere Valle Giulia knew the above clause because he had had it put in place, and prepared a project for a church of the type of St. Agnes in piazza Navona with canonical next to it. On presenting the said project to the Pope, accompanied by Baron Monti, Benedict XV said, after examining it, “we want a more monumental church”. Brasini replied: “All right, Your Holiness, I will gladly design it, but to whom shall we dedicate it? Baron Monti replied: “Certainly to the Madonna”. Benedict XV added: “Yes, to the Madonna and to the four evangelists”.

Once the site offered by the land company had been determined, Pope Benedict XV sent Bishop Tedeschini to examine it in the company of Baron Monti and Brasini. What Tedeschini replied to the Pope when he saw that land was: “this is a good well that is only good for breeding frogs”. It was indeed a low land where grass abounded thanks to the water from the subsoil. The Pope upon receiving these negative messages did not accept the donation of this land, softening the refusal by saying that there were still no faithful in the place, which was true. This happened on September 9, 1918.

Seeing this negative response, some of the Society thought they should offer other better-located plots of land. However, the architect Brasini was opposed because he had already combined a panoramic view that would match the Flaminio Bridge, which he had already conceived. This bridge should connect an avenue that would reach Maresciallo Pilsudsky and Guidubaldo del Monte so that the Flaminio bridge would be joined to the Temple, and from there there there would be a very beautiful view: on the right, the dome of the Vatican and on the left the dome of the Temple.

In any case, it was clear that this donation was because the land was not very suitable for building, but it would serve to revalue the adjoining land. So Brasini insisted, paying a large sum of money to a chamberlain of the Pope to influence his favor, and also proposing a change of title, dedicating the temple to “St. James (patronymic of Pope Giacomo della Chiesa) and the 4 evangelists”. Thus, in a few months, the Pope changed his mind and accepted the donation, always with the intention of building the temple “when the conditions of the Holy See allowed it”. But according to Fr. Felipe Maroto, CMF, the reality was that the Pope had no intention of getting involved in a matter that involved an exorbitant outlay of money.

In the meantime, Father Martin Alsina, CMF, was on a visit to the Americas, which would occupy him for the whole of 1921. From there, as Fr. Joaquín Bestué, CMF, tells us, he sent a check of 1,200,000 pesetas to buy a house and church in Rome, since we only had some rented outbuildings in the house of via Giulia[2]. In those days the Claretians had a very large list of houses that were for sale. Fr. Felipe Maroto, CMF, sent Fr. Esteban Garcia, CMF, to the Vatican to ask if we could acquire one of them located between Piazza de La Indipendenza and Castro Pretorio. Mariani, spoke to the Pope, who told Mons. Mariani to offer the Brasini Project in Parioli to the Claretians. It was the first days of 1922.

On January 17, 1922, Father Joaquín Bestué, CMF, Superior of the House, wrote to Father General, already back from America on the 31st of January, and told him: “They have given the Pope a large piece of land in a very modern neighborhood where there is still no church. One of those who intervened in the matter, speaking with a priest, upon learning that we were looking for a house, told him that we could undertake the work of the Church on that land. The General objected that we would prefer to dedicate it to the Heart of Mary rather than to St. James, according to the idea of the donor. That person who is a Monsignor of high office told the Pope, who replied that for him the question of the invocation was secondary and that he would find out what were our projects and our strengths”.

In a letter from Fr. Maroto on January 24 to Fr. Arrrandiaga, he commented on the situation and added: “We found out more about it and it turns out that the land is really offered and accepted by the Pope, but legally it has not yet been transferred to the Holy See, besides the architect who proposed the project has the right to direct the work. Having spoken with him, he said that naturally his project of a majestic temple dedicated to St. James, etc. must be followed with an expense of many millions, so much so that it cannot yet be foreseen, and the architect himself only hopes to start executing his plan, leaving it to the next ones to develop and finish it. In spite of all this grandiosity, Father Larraona says that we would have to follow this because we would not cease to have the means. Now with the death of the Pope all this is even more uncertain. I and some others, persist in the idea of buying the villino of via Aurelia” (near the Curia of the Franciscans).

Pius XI ordered Brasini to simplify the project (see Annals 1923, pg. 52), and again sent Bishop Mariani to speak with Father Maroto, with whom the architect Brasini also met. At the same time, the Aedes Company, assignee of the land to the Holy See, on April 28, 1922, passed a deed of donation in favor of the Holy See and promised to buy another piece of land to complete the area.

As we said at the beginning of this article, the XII General Chapter met in August 1922 and made the decision to assume the commitment, knowing that the Society, owner of the land, had made the donation to the Pope, giving two years to begin the work (Annals 1923, pg. 49). On February 9, 1923, the Pope authorized the dedication of the church to the Immaculate Heart of Mary. On May 20, 1924, Ascension Day, the first stone was laid[3].

[1] When this decision was made, both the Pope who made the offer and the Superior General who received it had just died that same year. One on January 22, the later on March 2, 1922. 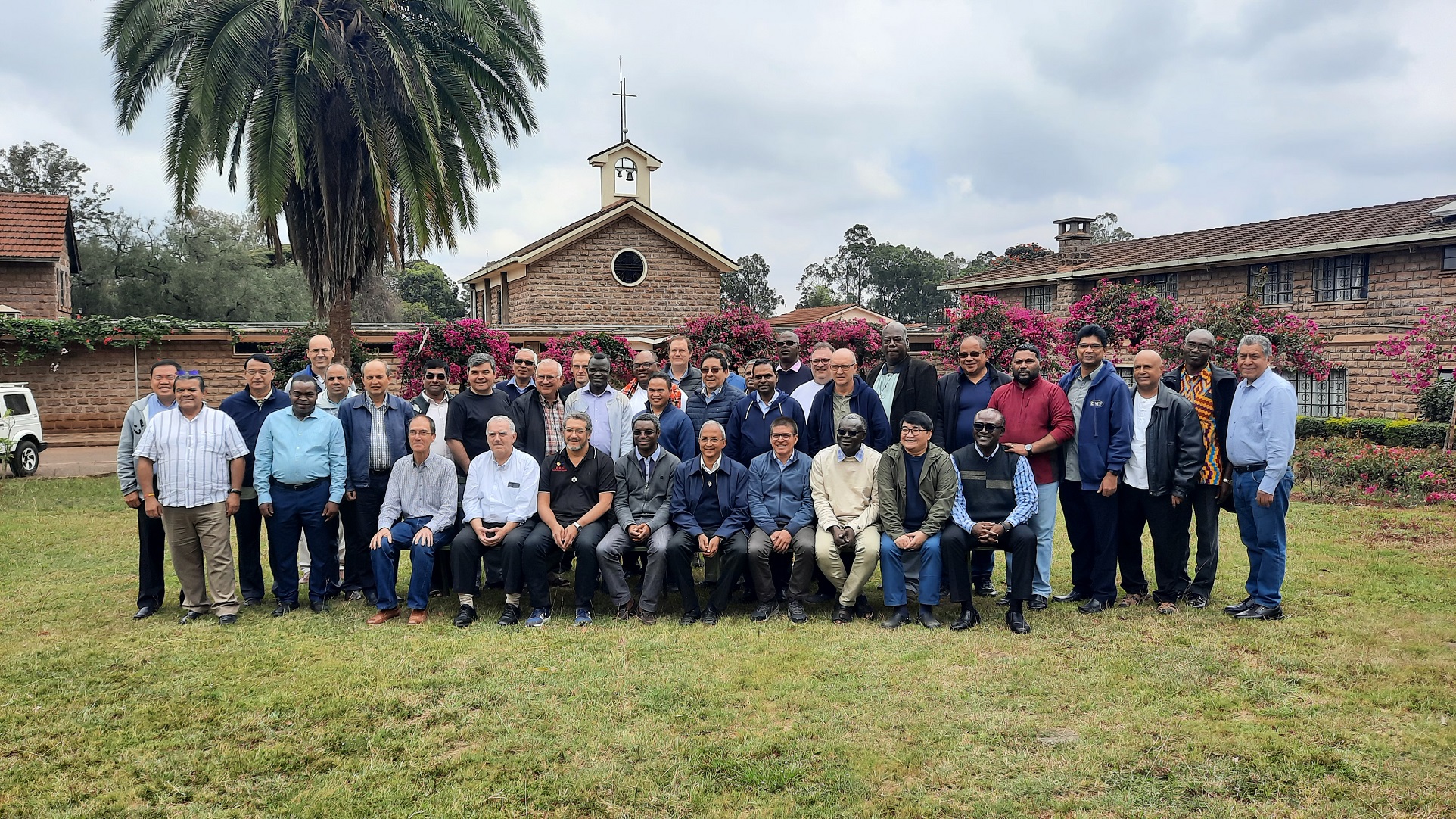 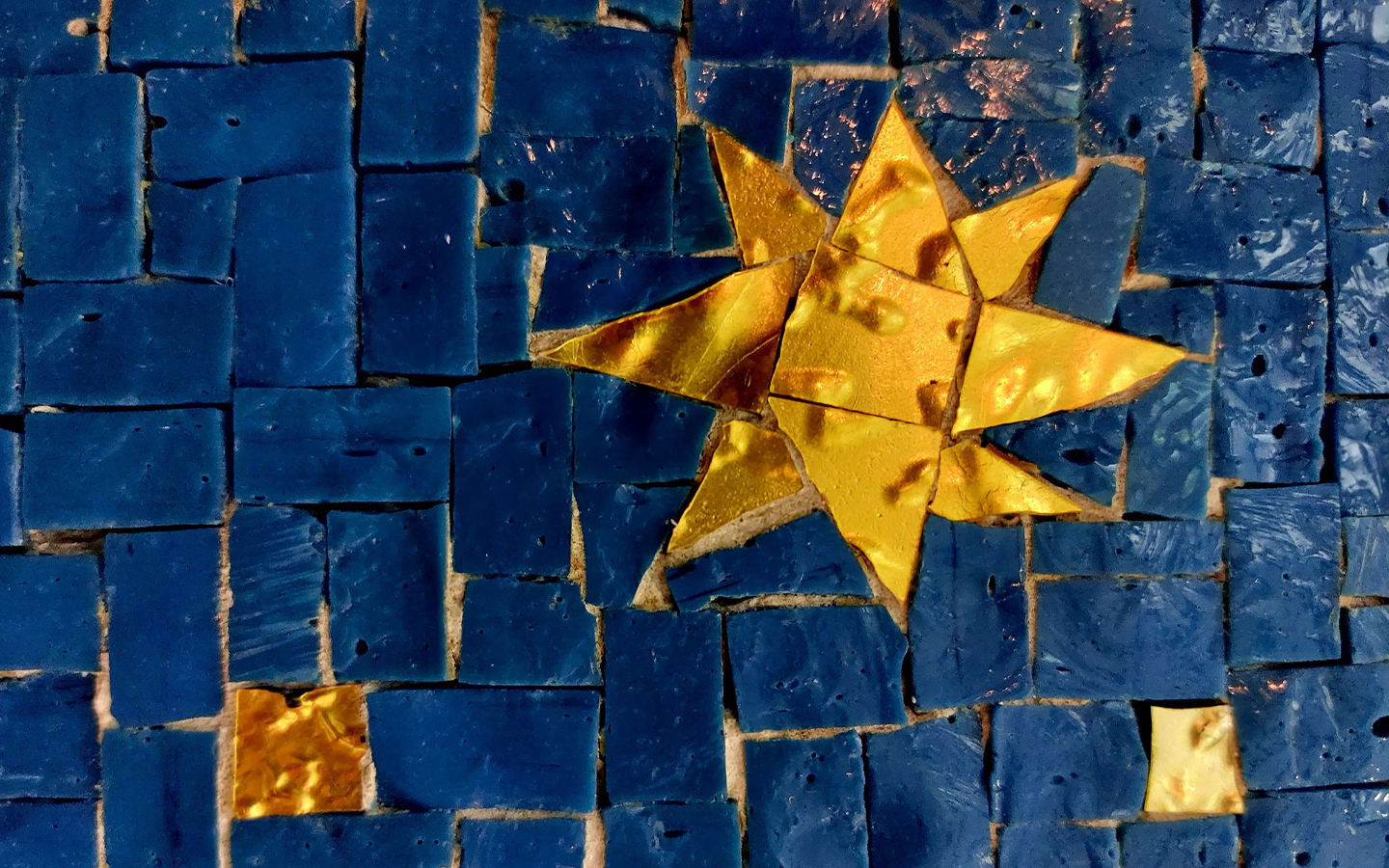 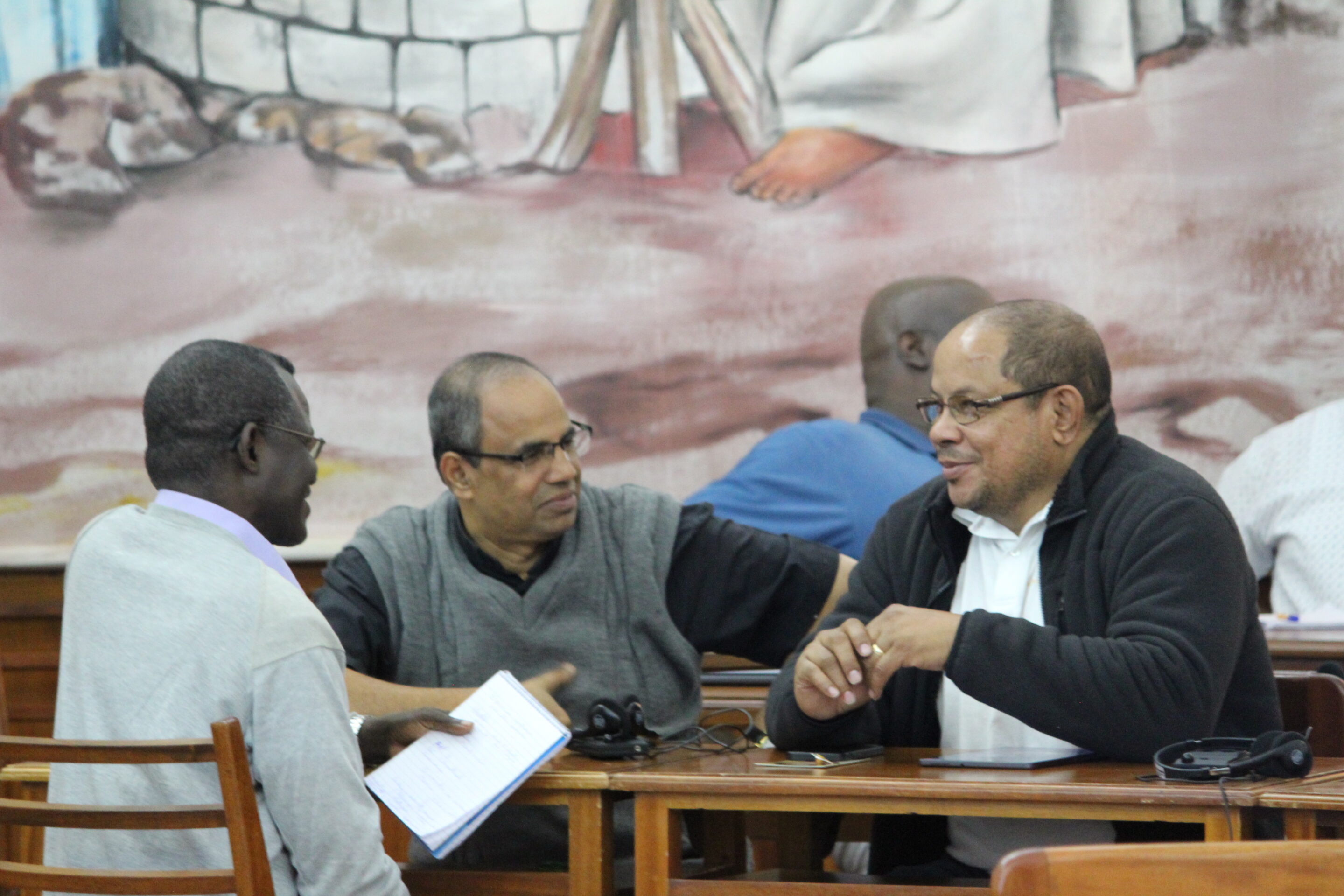