85th Anniversary of the “Martyrs of San Joaquín” 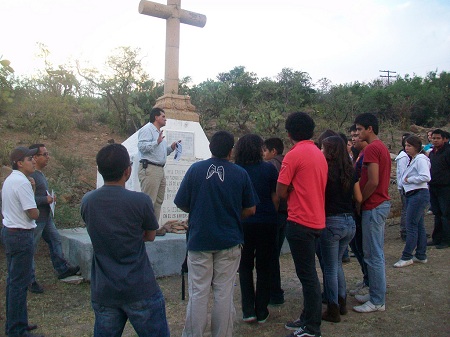 Lagos de Moreno, Jalisco (México). In the afternoon of Saturday the 21st and Sunday the 22nd of April, during the vespers of the 85th Anniversary of the Martyrdom of Fr. Andrés Solá, various youth gathered coming from the Claretian Youth Ministry of México.

The site is the place commonly known as “Rancho San Joaquín”, where the three blessed martyrs were shot in 1927 during the religious persecution in México.

The young people held a prayer vigil celebrated through prayer, singing, meditation, and later a party of fraternal sharing. They took the opportunity to reflect on the homily given by the Superior General of the Claretians, Fr. Josep M. Abella, on November 19, 2005 on the eve of the beatification, and viewed the screening of a documentary about the martyrdom.

The meeting was coordinated by Fr. Henry Mascorro, CMF and was part of an initiative of the Claretians Mexico to extend Youth Ministry to their different missionary positions. There was also the participation of some Claretian seminarians and young people from various cities, highlighted by the JOSAMAC group of Guadalajara and the MAR group from León.

The encounter ended on Sunday the 22nd at noon when the young people joined in a eucharistic celebration with numerous pilgrims, who each year gather at the place of martyrdom to express their faith and implore the intercession of the martyrs.

The Mass was presided over by the Provincial of México, Fr, Alejandro Cerón, accompanied by several priests. At the end, the young people gave their testimony and expressed a desire to join together next year, and to promote missionary vocations.