A Dream, a New Name, and a New Beginning 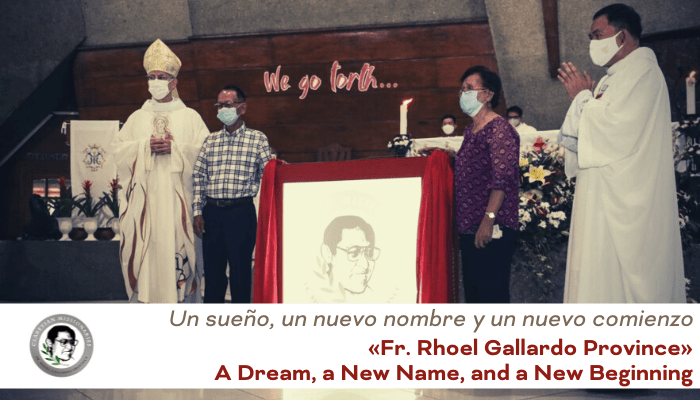 Quezon City, Philippines. The Claretian Missionaries of the Philippine Province officially launched its new name on Saturday, November 20, 2021, at the conclusion of the year-long celebration of its 75th Year of Claretian Presence in the Philippines, during a Eucharistic Celebration held at the Immaculate Heart of Mary Parish in Quezon City, Philippines. The new name is after its martyred priest, whose elevation to the altar is now being worked by the Territorial Prelature of Isabela, Fr. Rhoel Gallardo, CMF. The Philippine Province is now officially called “Fr. Rhoel Gallardo Province.” With the province’s present structure, with missions in Australia, Vietnam, and Myanmar, changing its official name is timely and fitting.

The celebration started with the unveiling of the 75 years of Claretian presence in the Philippines commemorative marker built in front of the church. Provincial Superior, Fr. Elias Ayuban, Jr., CMF, led the unveiling, and His Excellency, Most Reverend Charles John Brown, DD, Apostolic Nuncio to the Philippines, blessed the marker.

After the unveiling and blessing, the whole assembly proceeded inside the church to celebrate the Thanksgiving Mass, presided by the Apostolic Nuncio himself. Most Rev. Honesto Ongtioco, DD, Bishop of Cubao; Most Rev. Roberto Gaa, DD, Bishop of Novaliches; and Most Rev. Antonio Tobias, DD, Bishop-Emeritus of Novaliches, prelates where the Claretians are present in Metro Manila also concelebrated. Claretian priests from different parts of the Philippines joined the celebration with some former Claretians who are now members of other Congregations and Dioceses. Also present are the scholastics, the aspirants, the brother members of the Congregation, and the members of the Claretian Family.

After communion, the official announcement of the new name of the Province and the unveiling of the new logo of the Province took place. And at this point, the parents of Fr. Rhoel Gallardo joined on stage the Nuntio and the Provincial Superior. The family and relatives of Fr Rhoel came very early in the morning all the way from Pangasinan to witness this momentous occasion.

After the Mass, a packed lunch and short program was held at the Claret School of Quezon City Gymn. Jubilarians of the Province were given a recognition certificate for the silver, golden, and diamond anniversaries of their Religious Profession and Sacerdotal Ordination. Frs. Victor Sadaya, Kevin Rendor, and Larry Miranda, CMF, and the Dilaab Music Ministry choir rendered songs to the public. The Filipino college seminarians danced, and the Vietnamese presented a Vietnamese piece and the youth of IHMP presented for the last time the animation of the 75th Claretian Presence in the Philippines hymn. The simple program ended with the words of the father of Fr. Rhoel Gallardo.