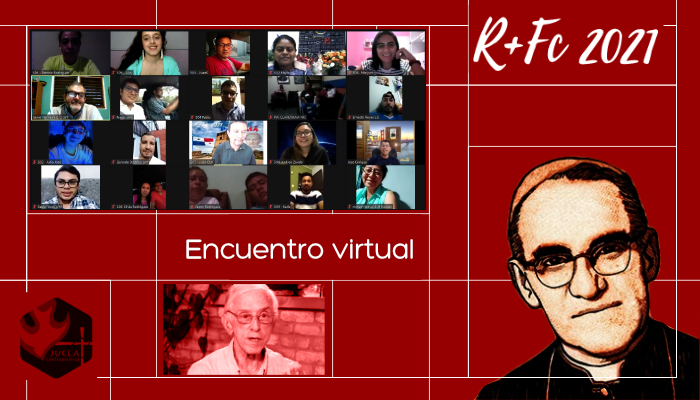 Central America. The IX Encounter of the Claretian Family in memory of the martyrdom of St. Oscar Arnulfo Romero, R+fc Virtual Edition 2021, was held from March 19-21. The objective of the encounter was to celebrate the gift of the missionary charism that the Claretian Family lives, sent to the service of the Kingdom of God in Central America, especially among the youth.

On this occasion not only the testimony of the martyr Saint Oscar Arnulfo Romero (Salvadoran) was shared, but also the life and work of the prophet Monsignor Pedro Casaldáliga, CMF (Catalan) and the martyrs of the causes of the Kingdom in Central America.

This year the encounter R+fc 2021 Virtual Edition was carried out with transmissions through platforms and official pages of the different social networks of JUCLA Central America, sharing topics of formation, reflection, prayer and animation.

With the aim of getting to know and motivate other young people who have not yet experienced this encounter in person, as an introduction to the virtual meeting, nine testimonies of brothers and sisters who have experienced the R+fc encounter in previous years were presented.

It was a three-day journey with an encounter with members of the Claretian Family from the different countries of Central America identified by colors, namely: Guatemala, light blue; El Salvador, red; Honduras, green; Nicaragua, blue; Costa Rica, orange and Panama, white.

Two figures with a light of their own

By the grace of God, Monsignor Romero, from his beginnings as a seminarian, was accompanied and formed by the Claretian Missionaries in the seminary in San Miguel, El Salvador. Later, throughout his life, he would maintain a special closeness with the Congregation. As a priest, he celebrated his first mass in the Claretian Basilica of the Heart of Mary in Rome, Italy. It is not surprising then, that the new generations, who vibrate with the Claretian heritage and the testimony of dedication of a brother of these Central American lands, are deeply moved by remembering and celebrating Saint Romero, besides asking for his intercession.

If St. Romero is remembered for his preferential option for the poor, “voice of the voiceless”, Monsignor Pedro Casaldáliga is also remembered as the artisan of the word; poet, prophet, and voice of the indigenous people and the causes of the Kingdom of God in Brazil. These two men of God were remembered as models and referents of the new generations of the Claretian Family in Central America.

On Saturday, March 20, a tribute was offered to them, with the participation of brothers and sisters from other latitudes who joined our celebration with their song and word, to honor the memory of these fathers of the faith in America.

We witnessed the launching of the new influencers of the Claretian Family and the new project “Claret Way”, a very interesting proposal that has been working for some time. We were also able to witness the commitment of the first community of Lay Claretians of Nicaragua, Mother of Fair Love community. Likewise, we had the special motivation of the Prefect of Apostolate of the province, Fr. Javier Hernandez, CMF, encouraging us to continue evangelizing in the style of Claret in this young vineyard.

We concluded these three intense days with our prayer to Mary, entrusting ourselves under the Marian invocation of each country and praying for the new generations in each nation of Central America. This prayer was also propitious for the sending to the mission in the virtual networks and preparation for our Youth-Virtual Mission of Easter 2021.