Lay Claretians: A Specific Color in the Church 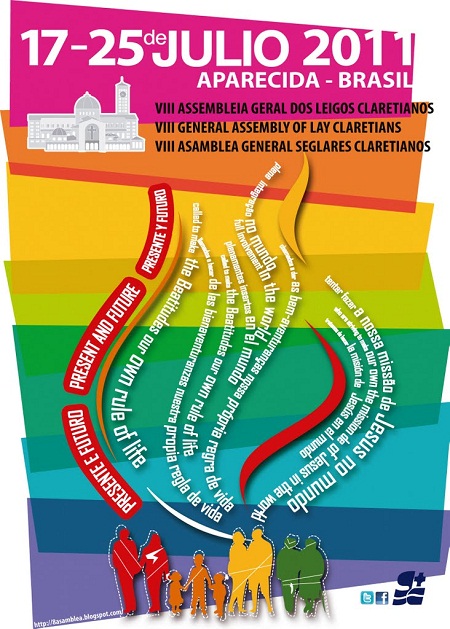 In preparation for this the distinct communities of the Lay Claretians began a process of work which began several months ago and which will conclude at the Assembly. The liaison to the movement from the Claretian Missionaries is Fr. Paul Smyth, CMF, Vicar General of the Congregation, other Claretians from Brazil, and some from the regions in which we they are present.

The Assembly began with a celebration of the Eucharist at the Basilica of Our Lady of Aparecida. During the mass, Tino Rodriguez, SC, Secretary general, gave his reflection in light of the proclaimed Word:
“We Lay Claretians are seeds which we cannot leave smothered by the discord of the world in which we live and are inserted. And, at the same time as seeds, we are sowers, evangelizers. We are called to proclaim the Kingdom and transform the world.”

Alluding to the colors and ideas on the banner prepared for the occasion (photo) by Auxi Villafuerte, SC from Seville, Tino Rodriguez said: “As a charismatic movement we have a specific color within the Church. We are red fire. The red of love, of the burning heart of Mary. In it we are forged like spears launched into the world. In this Assembly we have to welcome the will of God to know the direction in which we have been sent. It doesn’t matter that we are small, that we have problems and deficiencies. A little yeast can ferment the whole loaf, because the power of the Spirit and the Love of God is within us.”

The Assembly can be followed at: http://8asamblea.blogspot.com