Meeting of Claretian students from Iberia 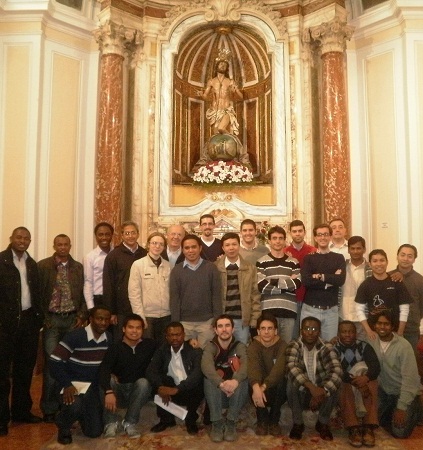 They were accompanied by their formators from these centers, those in charge of formation from the Provinces of Spain and the General Prefect of Formation, Fr. Mathew Vattamattan. The theme of the encounter was; “Formation for a prophetic religious life”.

Fr. Mathew Vattamattam framed the question presented in the document “A formative itinerary for a prophetic religious life” of the USG-UISG.

Earlier, Julio César Rioja, CMF, illuminated the theme speaking of his experience of the “collective and missionary commitment as a result of an evangelical reading of reality”.
In addition, was the participation of Javier Ojeda, CMF and Laura López, of the Team of Solidarity and Mission from the Province of Santiago to present “the prophetic commitment of religious life and our Congregation.”

Various students coordinated four workshops on the real challenges facing a prophetic religious life: “Violence”; “Outside the home”, “On the side of the road”, and “Responsible consumption”.
All of these themes and the reflection they fostered were made into various concrete proposals to be introduced into the formation itinerary.

The Encounter also allowed time for recreation and socializing. At the same time in the afternoon of May 1st all gathered at the Church of the Rosary (La Granja) in Segovia where they had a short time for Eucharistic adoration, commemorating the 150th anniversary of the Great Grace of our Founder, “recognizing God in the heart of Claret – and in each Claretian missionary – and discovering Claret – and the Congregation in the heart of the world. (Photos)