Priestly ordination of Charles R. Rolón, CMF: “What I lost in my life through fear I have now gained in love” 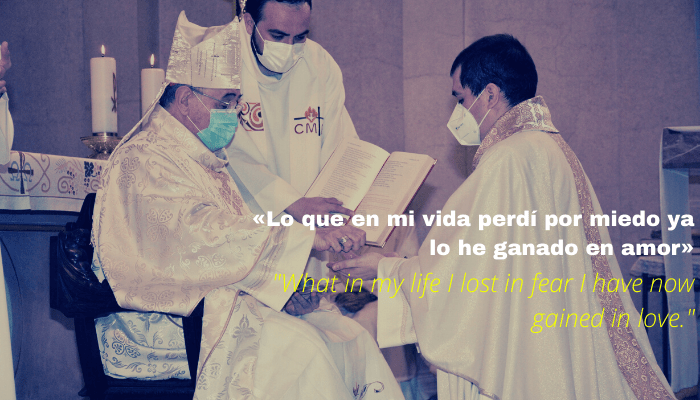 Madrid, Spain. “In the presence of God, I feel that it is time to begin again”, said the newly ordained priest Charles R. Rolón by way of prayer at the end of the celebration last July 16 in the Sanctuary of the Immaculate Heart of Mary of Ferraz Street, in Madrid. This date is always for us, the Claretian Missionaries, a day of great joy and meaning, since it is the day on which we were born as Missionary Sons of the Immaculate Heart of Mary, a grateful memory that invites us to bless. This year, the priestly ordination to which we were invited multiplies those reasons that make us give thanks to God.

“These past few days I have passed through my heart so many places, so many faces, so many moments full of memories that I can only think that God has always been there, waiting for me and preparing me,” said Rolón. The new missionary stage that the young Claretian religious, ordained and anointed by the power of the Spirit, has just begun, is the result of an experience tested in the crucible of the disease, the one that made him think that ‘sister death’ was hovering around him, ready to take his life. Then, knowing that he was fragile and more limited than ever, “I felt vividly the transforming power of God’s grace,” he admitted. At that time neither he nor the medical team that accompanied him knew what was going to happen. Today he feels happily recovered. “What I lost then because of fear, I have now gained in love,” he exclaimed exultantly. And he added: “For all that I have gone through, thank you, Lord.

“We have blessed God the Father many times for you, for your vocation, for the Church that saw you born and grow”, sincerely granted the Major Superior of the Province of Santiago, Pedro Belderrain, in the space left by the liturgy for thanksgiving. His words found echo in those of Charles himself, who on various occasions and in different ways has left a record of the affection of so many who, either from the origin of his missionary life, in his native Paraguay, or in the later journey of this, in Aranda del Duero, in Segovia, in the Claretian Seminary of Colmenar Viejo or in the different Claretian communities with which he has lived in Madrid, have shared his life with him, surrounding him with care and supporting him with prayer. “Without the community, perhaps I would not have made it,” he recalled.

The Provincial Superior also said: “You arrived in Spain newly professed as a shy boy who dared to cross the ocean to proclaim the Gospel […] And this afternoon, without looking for it, Charles, you have brought together missionary brothers from the North and the South, from all types of service and ministry, of very different sensibilities. Thank you again!” he exclaimed.

Not in vain, the ceremony was retransmitted through the internet, being seen from different countries of up to three continents. A sample, undoubtedly, of a Claretian life called to be a seed of unity, encounter, and joy.

On the other hand, the ordination was attended in Madrid by a large group of Claretians from different parts of the province, as well as by the Vicar General, Fr. Gonzalo Fernández Sanz, and other religious from different Claretian provinces, including that of San José del Sur. Making the Universal Church present, we could also count on the presence of Card. Aquilino Bocos, and on behalf of the Church on pilgrimage in Madrid, with the Episcopal Vicar for Consecrated Life, Fr. Elías Royón. A special mention in the form of a heartfelt applause, at the request of Charles himself, was given to the members of the medical team who treated him during the last months of his illness and who also wanted to accompany him on the day of his ordination. “They saved my life. They rescued my life from death,” said Rolón with emotion.

“The circumstances in which we are immersed after the outbreak of the pandemic speak of a continuous change of plans,” introduced in his homily Mons. Luis Angel de las Heras, Claretian missionary and bishop from whose hands Charles received his priestly ordination. “I think it is one of the positive lessons that we are learning in this time, this discovering where the essential of each story is, at the same time that we learn to divest ourselves of some dispensable things.”

“Today, looking at your story, Charles, we can sing with you ‘the Lord has been great with us and we are joyful’.”

“I still remember,” continued De las Heras, Rolón’s former formator during his time in Colmenar Viejo, “a teenage seminarian, leaning against the wall, broom in hand, one morning asking if he could be a missionary outside his homeland. For this ‘great work’ that our founders began 172 years ago, continues with this thanksgiving to the Lord”. Thus,” continued the Claretian bishop, “with changed plans, today we celebrate this appointment of the Spirit, this event that is a reason for joy in knowing that your deepest desires are shaped by the will of God. So many people worry that God’s will spoils their lives by changing their plans, when, in fact, God’s will only arrange lives”.

Two days later, on the first Sunday after his ordination, Fr. Charles Rolón celebrated his first Eucharist with the parish community. In it he emphasized his desire to share with each one of those present – including those who connected again from a distance thanks to the retransmission offered – this very special gift that he had so recently received, “having been ordained to serve the people of God”. Thus, in his first homily, he recalled his personal experience, “as a sincere testimony of faith based on my vocational history.”

“My missionary identity was born from a personal encounter. It arose through contact with the Gospel of God. My vocation was forged from initial formation and was consolidated as that of a Claretian missionary,” he began. “Because I felt this call, I left my own land, friends, family and acquaintances,” he said.

Thanks to that enthusiasm then, today the fruit is reaped in the form of an enormous priestly passion; in his case, the one wrapped in the generosity of one who only wants to follow in the footsteps of Christ in those of Claret. “In spite of my ups and downs, God continues to strengthen my Claretian vocation,” he said in this sense. For this, “family and congregational support is extremely important.” “Vocation is not built alone, but through external stimuli and always being in an attitude of openness to God,” he conceded.

Finally, “as this Sunday’s Gospel presents us, there is an invitation that comes from the heart of God,” Rolón exhorted.

“We are invited to find a quiet, peaceful place and to rest with the Lord. Let us accept this invitation. Many things overwhelm people: nervousness, haste, worries, business…and nothing gives us the harmony we are looking for. We need to rest, to rest with God. Only from him can come to us that peace and stillness. This is the message. Let us open our hearts to welcome it”, he concluded.