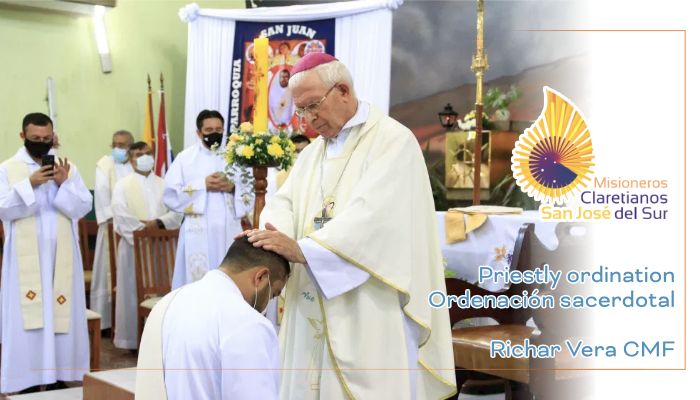 Lambaré, Paraguay. On Saturday, April 17, the priestly ordination of Richar Vera, CMF, was celebrated in the Church of St. John the Baptist of Lambaré (Asuncion).

The ceremony was presided over by Mons. Ignacio Gogorza (betharramite), bishop emeritus and great collaborator of our parish, presided over the ceremony, which was attended by a small number of participants, due to the health protocols for the pandemic that is registered worldwide. Even the family of Pa’i Richar had to reduce the number of guests and travel to Lambaré.

The Provincial Government was represented by Bro. Fernando Kuhn, CMF, Prefect of Formation, while the rest of the team, missionaries, friends, and close people followed attentively the live transmission that was made through the digital networks of the Province of San José del Sur.

Initially, the ordination was scheduled to be celebrated in the Virgen del Rosario Church of Yhu, but due to the increase of the positive cases of Covid-19 in that area, it was decided to change to this Church of Lambaré, being this the third ordination celebrated in the place: the first was in 1982, of the missionary De los Santos Oroa (first ordination of a Paraguayan Claretian) and the second, in 2013, of the missionary Luis Villasanti.

The newly ordained thanked all: to the parish community of Lambaré, who wishing to participate in this celebration, and not being able to participate in person, joined virtually and with their prayers; to Bro. Adrián who organized and directed the parish choir; to the seminarians who together with Pa’i Ovidio organized the house to receive and welcome the invited people and the sharing in the Tinglado with the whole Claretian Family. He also thanked the whole province that, through digital media, was united, especially the Provincial Government.

Let us continue praying and working for vocations and thus respond to the invitation of the Risen Lord: “Go into the whole world and proclaim the gospel to every creature.” (Mk 16:15).