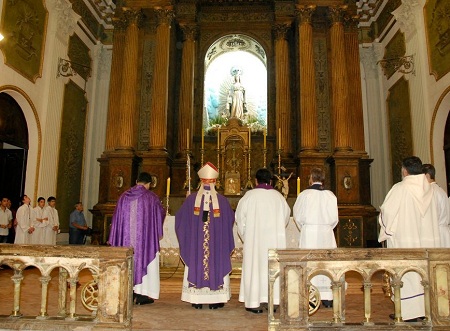 Santiago de Chile. In an emotional celebration presided by the archbishop of Santiago, Don Ricard Ezzati, and the Major Superior of the Claretians of San José del Sur, Fr. Mario Gutiérrez, CMF, the Basilica of the Immaculate Heart of Mary was reopened on Sunday, March 18th.

The church had been closed for two years due to damages caused by the earthquake of February 27, 2010.

During that time the Eucharist was celebrated in the adjacent patio where the community gathered together. In his homily the archbishop thanked the evangelizing work of the Claretians since they came to this country 142 years ago, and who constructed what would later become the first basilica in the world honoring the Heart of Mary.

As well as the construction of the material church, the Claretians extended themselves throughout the Chilean territory and neighboring countries to evangelize in parishes, schools, sanctuaries, and an intense use of the means of communication.

Before ending the mass, the concelebrants were led in a procession through the church, leading to the entrance, at which the archbishop blessed the new cross which crowns the façade. Later on, together with all those who worked on the restoration, the doors of the church were opened while the traditional hymn to the Heart of Mary was intoned.

A video of the celebration may be seen at: http://www.youtube.com/watch?feature=player_detailpage&v=z3IUQPetUeo