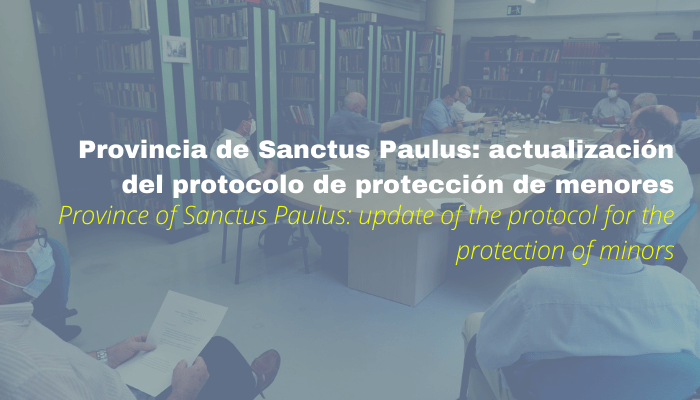 Barcelona, Spain. On Tuesday, June 15, 2021, a meeting was held in Barcelona with the leaders of the Claretian communities and the directors of their educational institutions in Catalonia to present the new ‘Manual for the protection of minors and vulnerable adults and Protocol for the prevention and intervention in the face of a crime of sexual abuse’. Ricard Costa-Jussà, Provincial of Sanctus Paulus (of which the territory of Catalonia is part since January 2020) and Dr. Xavier Puigdollers, lawyer and head of the Service of Reception and Investigation of the Claretian Missionaries in Catalonia [Click here to read the report of the Service of Reception and Investigation on possible cases of abuse presented in the same session(in Spanish)].

In 2019 the General Government of the Claretian Missionaries approved a new Vademecum for the protection of minors and vulnerable adults, and a protocol for the prevention and intervention in the face of a crime of sexual abuse, adapted to the new indications of the Holy See. The General Government commissioned all the Claretian provinces of the world to adapt this protocol to local realities and legislation. The Claretians of the Province of Sanctus Paulus have carried out the adaptation of this protocol, which has been approved by the Provincial Government. The Congregation, committed to protection, has had a protocol since 1998, which it has been completing and updating, following the orientations and directives of the Holy See. Until now, a protocol was in force, of which the last revision and adaptation had been made in 2017, integrating the guidelines of the Holy See and the civil and canonical regulations.

The new protocol expands and updates the regulations and principles in force. The text is framed in the presentation of the Vademecum of the Claretian Missionaries:

The abuse of minors and vulnerable persons committed by a missionary profanes the sanctity of the other person denigrates his own consecration and betrays the Lord whom he proclaims. We are firmly with the Pontiff in ‘combating this evil that touches the core of his mission: to proclaim the Gospel to the little ones and to protect them from ravenous wolves […] if in the Church even a single case of abuse – which represents a monstrosity – is discovered, that case will be confronted with the utmost seriousness’.

The protocol involves the entire Claretian community and collaborators in preventing and avoiding abuse and doing “everything possible to make all Claretian environments safe for everyone” because “the care of persons is an integral part of our mission”. It makes explicit the commitment to “protect in a particular way all children, youth and vulnerable adults” and “create safe and caring communities that provide loving environments where there is informed vigilance about the dangers of abuse.”

The protocol specifies actions in the following areas:

Among other points, it details the concrete way to act in the face of a denunciation of sexual abuse, the norms that must be complied with and enforced by the superiors and those responsible for the educational and pastoral works, a model of denunciation report and elements of reference for the code of conduct that each Claretian work or entity must elaborate. It also includes the obligation to make known the Manual and the protocol to all the persons linked to the educational and pastoral works of the Claretians and a responsible declaration to be signed individually by all those responsible for the activities.

In the presentation, Dr. Puigdollers emphasized that “at the center of the document are the victims and their families: to protect them, accompany them, help them to repair the damage they have suffered and assure them the justice they deserve“. Also “the obligation of each center to have its own Protocol of Prevention and Action in a situation of abuse, which must assume and incorporate what is established in the provincial protocol”.

In the presentation, the Provincial, Father Ricard Costa-Jussà, stressed that “the event we are convening today is in tune with the daily impulse, the good action and good work of many people in our centers and activities, to promote a healthy and full personal and human formation and growth”. He also explained that the presentation of the report of the Reception and Investigation Service “is a clear, firm step and a reflection of the institutional commitment and the desire of all to protect, prevent and intervene to create safe spaces and environments”.