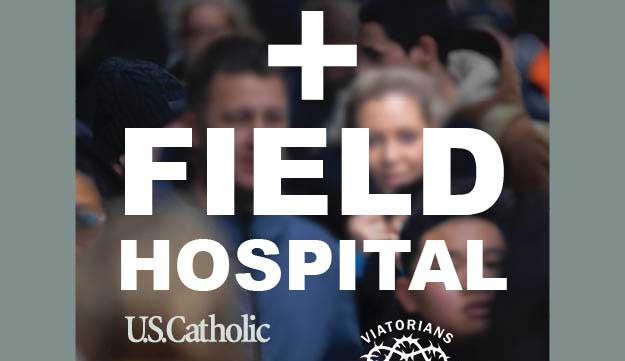 Chicago, USA. U.S. Catholic Magazine is launching a new inaugural podcast next week, on Wednesday, February 16th, 2022, called + Field Hospital that focuses on Pope Francis’ work to heal the church. We welcome you to connect and listen in. A new episode of Field Hospital will be released every two weeks starting February 16. Subscribe for email updates at uscatholic.org/podcasts and look for new episodes on Apple Podcasts, Spotify, or wherever you listen to podcasts.

Field Hospital is U.S. Catholic’s inaugural podcast, hosted by Jeannie Gaffigan, writer and executive producer of The Jim Gaffigan Show, and Mike Lewis, founder of the website Where Peter Is. Guided by Pope Francis’ vision of the church as a “field hospital” that continues to carry out the healing mission of Jesus Christ in the world, Gaffigan and Lewis speak with experts and Catholic personalities about important topics in the world today and how the church can meet hurt with healing. Field Hospital is sponsored by the Viatorians.

U.S. Catholic is published by the Claretian Missionaries. Following in the footsteps of St. Anthony Claret—a prolific writer and publisher whom Pope Pius XI called the “Modern Apostle of the Good Press”—the Claretians in the United States began their publishing ministry in 1935 with the first edition of the magazine The Voice of St. Jude. In 1963, during the Second Vatican Council, The Voice of St. Jude transformed into U.S. Catholic magazine. In 1995, U.S. Catholic launched its first website, making the award-winning content available to even more readers.