Vocation Ministry Workshops in the Caribbean 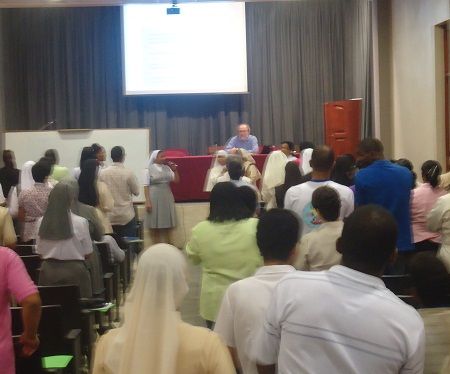 Bayamon, P.R. During the past month of March, Fr. Juan Carlos Martos, CMF, in charge of the General Secretariate of Vocation Ministry, conducted two workshops for religious men and women: one in Santo Domingo, Dominican Republic and the other in Bayamón, Puerto Rico, helped by two Claretians from the Delegation of the Antilles (…)

The workshops, which lasted three days, were an invitation to reflect around the model of vocation ministry which the Church today has proposed for the Western world.

The proposal was centered on the creation of local teams of vocation ministry introduced into the ordinary spaces of life and apostolic work. Such teams, composed of religious and laity, would be centered on “creating a vocational culture” and in making possible that the ministry of all vocations is the driving force of the life and mission of Christian communities. The proposal demands a great effort in attending to vocation ministry, which theoretically is acknowledged as urgent, but is normally ignored and placed on the sidelines.

The Workshops were evaluated positively, opening the possibility of having other sessions building on this workshop with the theme of the accompaniment and discernment of vocations specific to the consecrated life.