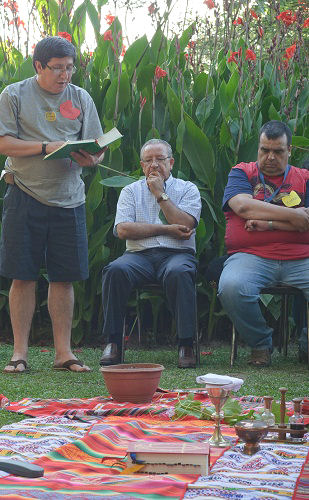 Talagante, Chile. Three days of fraternal, intensive work took place in the Fr Claret Centre of Talagante, which hosted the 2011 Summer Bible School. Work began on Friday 28 and lasted until Sunday 30 January. The event was organized by the Claretian Bible Team of the South Zone in Latin America, which is in the process of unification.

Some 80 participants, both Claretian communities in northern, central and southern Chile, along with people from non-Claretian communities, gathered at this meeting of CEBICLAR, with a warm sense of friendship, joy and solidarity, in order to reflect on the Word God.

The presence of lay and religious representatives CMFF Argentina, Paraguay, Colombia, Ecuador and Chile, generated an atmosphere of unsurpassed American fraternity which made everyone feel a deeper desire for a better future for the people whose destinies are linked together, especially in the fight for a better life for the poor, in the light of the Word.

Professor Adriana Mora, Academic Vice Chancellor of FUCLA (Claretian University Foundation of Colombia) developed the theme on “the Synoptic Gospels.” Of great importance, too, was the work of groups organized for the occasion, reflecting on various topics, including education, social inequality, international relations and indigenous people in our country and on our continent.