Launching of the “Bible Clubs” 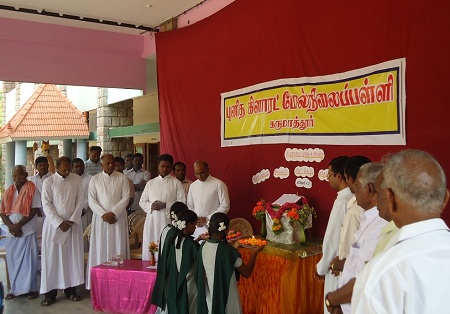 Karumathur, India. In the academic year, 2011-2012 the “Bible Club” was established at St. John’s School in Kochadai, Madurai. Having been a great success, on June 1st, the first day of the academic year 2012-2013, this program was officially inaugurated at St. Claret High School, Karumathur, Madurai.

The project was promoted by the educational ministry of the Claretian Province of Chennai. The purpose of the project was a response to the challenge to “Transform our educational institutions into Schools of the Word”.

The purpose of the Bible is to promote interest in the students to read, meditate and live the Word of God. They will also be provided all the necessary materials to deepen Biblical knowledge. A Claretian will be a spiritual guide of this club and three teachers will be animators.

In each academic year, a weeklong biblical celebration would be carried out by this club, a celebration which would essentially include Bible quizzes, memory competition on biblical passages, skits and dramas connected with biblical narratives and stories, fancy dress of biblical personages, biblical songs, posters and charts, drawing competitions, the making of biblical “models”, dances on biblical themes, and a collection for the biblical ministry of the Province, etc.

Initially, all the Christians would be members of this club, and later students from other religions would be invited to become the members without any force and compulsion.

The students of “Bible Club” will not only get an opportunity to be immersed by the living Word of God, but will also slowly become evangelizers spreading the message of Jesus.

At the inauguration of the 2012-2013 academic year, and the initiation of this project at Karumathur, Fr. Vincent Anesthasiar, the Provincial Superior of Chennai exhorted the students, and especially those in the “Bible Club”, to be catalysts of social change in the Gospel values of love, peace, justice, equality, fraternity and forgiveness.