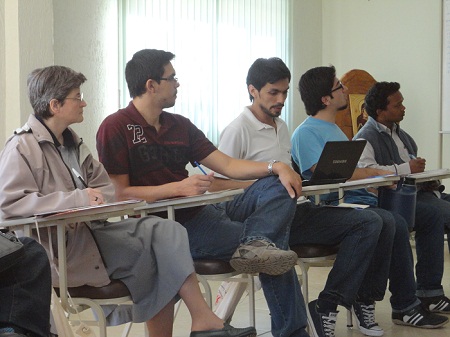 Represented were all the Entities of the Conference which had been convoked by its Secretary, Fr. Alejandro Quezada. The opening of the encounter was made by the Major Superior of Brazil, Fr. Marcos Aurelio Loro.

The Encounter offered detailed information of the programs and activities of the Vocation Ministry which is currently going on in each entity. This information included the participation of the Claretian Family at World Youth Day recently celebrated in Madrid.

Fr. Ricardo Morales, a diocesan priest from Argentina, presented the planning and conclusions – though not yet published – of the II Latin American Congress of Vocation Ministry celebrated in Cartago (Costa Rica) from January 31st to February 5th 2011.

The three Missionary Brothers present (Fernando Kuhn de Argentina, Giovanni de Colombia Oriental-Ecuador y John Alberto de Colombia-Venezuela) gave an animated presentation on the actual situation of the Missionary Brothers of the Congregation, particularly in CICLA. The conversation led to some proposals for more effective vocation promotion the Brothers in the Latin American and Caribbean zone.

The formative theme was presided over by the Secretary of the Vocation Ministry around the pastoral means of vocational discernment accompaniment.

The conclusions of the Encounter were revised and the operational proposals from the previous Encounter celebrated in Panamá in 2007 were carried out. Additionally, various suggestions were made to insure the vocational dimension of the next World Youth Day to be held in Rio de Janiero, Brazil in 2013.

Fr. Juan Carlos Martos coordinated a workshop on vocation ministry at the end of the Encounter. Participating were 9 sisters (5 Missionaries of St. Anthony M. Claret, 2 Claretian Missionary Sisters, and 2 from other congregations), 12 Claretian seminarians (8 from Theology, 2 from Philosophy, and 2 from minor seminaries), a formator, three vocation animators, and 17 laity who have been pressed into vocation ministry in the various parishes from the four regions of the Province of Brazil. The theme developed three topics: Youth Ministry in the mentality of the Church today, local teams in vocational animation, and the “sowing of seed” animation, as an action of shared mission. (Fotos)