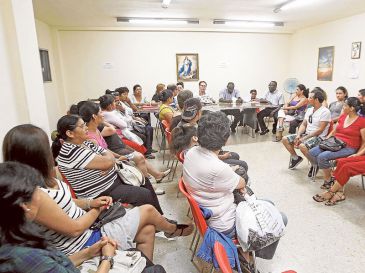 Valencia, Spain. The Parish of San Vicente Mártir of Valencia, run by the Claretian Missionaries of the Province of Santiago, provides a job center that has obtained more than 800 jobs for the persons who have requested its help during its five years of operation.

People who ask for help must first have an interview with Fr. Angel Sanz Garro, CMF, originator of the center, who evaluates their personal situations to determine the urgency of each case.

After the first interview the “unemployed” join the group to participate in the meetings on the first Monday of the month in which they receive psychological guidance. Also, on the second Monday of each month they attend training talks on issues related to employment, as well care for the elderly and dependent.

At the beginning, the job center was dedicated to the attention of immigrants; but due to the current situation, requests have increased significantly and there are more and more Spanish requesting help. The majority of the job seekers are women seeking work in the care of sick and elderly.

The Employment Center specializes in the care of dependent elderly people, because “they are the kind of sick people more difficult to care for and we believe that there is a greater demand for this”, says Fr. Angel. To this end, the group maintains contacts with the “Department of Social Welfare”, “Doctors of the World”, the NGO “Peace Movement” and the “Integra Center” dealing with Parkinson’s and Alzheimer’s patients. They also collaborate with “Cocemfe”, the confederation of people with physical and organic disabilities, comprising more than 30 institutions.