THE YEAR OF ST. ANTONIO MARIA CLARET IN THE ARCHDIOCESE OF SANTIAGO DE CUBA 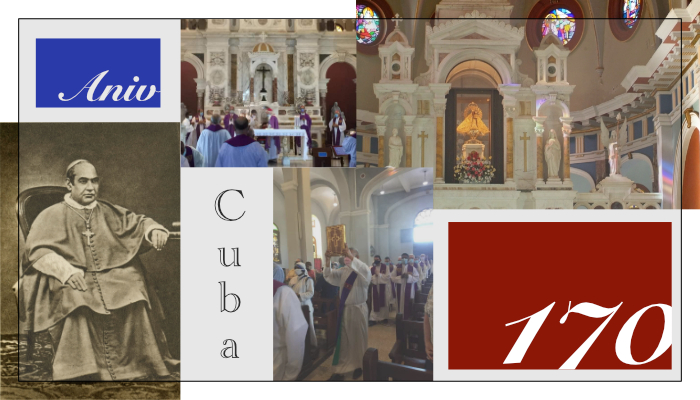 La Maya, Cuba. Last February 16 was the 170th anniversary of the arrival of Antonio María Claret to the Archdiocese of Santiago de Cuba as the new archbishop. An event that Monsignor Dionisio García Ibáñez, current Archbishop of Santiago de Cuba, in communion with the presbyterate and the Diocesan Pastoral Council, has decided to give special prominence by declaring the Year of St. Anthony Mary Claret throughout his archdiocese, which will end on February 16, 2022.

” Fifteen days after our arrival we went to visit the Shrine of Our Lady of Charity at El Cobre […] a center of devotion for all the inhabitants of the island […]” (Aut. 510). Already before, when he took possession of the Archbishopric, he had declared: “The Prelate will always be the Most Holy Virgin. My form of government will be that which she inspires in me“.

The inaugural Eucharist was presided by Monsignor Dionisio García Ibáñez, concelebrated with all the bishops of the Episcopal Conference of Cuba and the priests of the archdiocese and the participation of the religious men and women, together with the laity of the diocesan pastoral council. Due to the situation of COVID-19 it was not possible to have more people in attendance.

In the heartfelt and moving homily, Monsignor Dionisio recounted the different moments of the life of St. Anthony Mary Claret during his time as archbishop of the vast Archdiocese of Santiago de Cuba and highlighted the “missionary spirit” as the key to all his tireless pastoral action, reflected in the popular missions, in the pastoral visits, in the careful care of the clergy and the seminary, in the broad human and social promotion, in facing the difficult situations of that time: slavery, discrimination based on race and ethnic origin, the deterioration of marriage, of the family and of so many abandoned children… He did not forget to mention the concern for the education of children and young people, especially the poorest, and the foundation, together with Mother Antonia Paris, of the Religious of Mary Immaculate (Claretian Missionary Sisters).

The presence of St. Anthony Mary Claret, as Monsignor Dionisio affirmed, was a special grace of the Lord not only for the Archdiocese of Santiago de Cuba but for all Cuba. His life, his missionary spirit, is and continues to be a reference and a source of “inspiration” in the pastoral and social work of all, starting with “myself as archbishop” and of the priests, religious and laity.

This solemn celebration of the opening of the Year of St. Anthony Mary Claret gives way to other and varied initiatives, all of them conditioned by the pandemic we are living. However, celebrations have been scheduled on significant dates, meetings to share some aspects of the Pastoral Care of Claret with specific groups such as the clergy and seminarians, catechists, religious, missionary teams, pastoral agents. In the New Diocesan Museum, the “Exhibition on the life and work of Claret” is being prepared, highlighting his time as Archbishop of Santiago. Studies, research, and reflections on Claret will also be offered through the virtual media. Claret will be evoked in the Sunday radio program as well as in the diocesan magazine “Iglesia en Marcha” (Church on the Move).

It is planned to publish holy cards, cards, folders, and posters of Claret. Also, some booklets for the catechesis of the children will be published. There are plans to show the movie “CLARET” and other initiatives to be carried out during this year.

Fr. Mathew Vattamattam, CMF, Superior General, wrote a beautiful letter to Monsignor Dionisio on the occasion of this important feast for Cuba and the Claretian Missionaries of Antillas. In his letter, he evoked different moments of Claret’s life as Archbishop in those lands and told him:

“Through these lines, I want to express again my gratitude for the celebration of the 170th anniversary of the arrival of St. Anthony Mary Claret to the island of Cuba, and at the same time I offer the collaboration of the Claretian Missionaries in everything that is in our hands“.

We, Claretian Missionaries, beginning with those of us who are and live in Cuba, in our Independent Delegation of Antillas, in this “young vineyard” and in the whole Congregation, are happy to be able to celebrate this year of St. Anthony Mary Claret in this Archdiocese of Santiago. A “providential and unexpected” celebration that commits us to live and rethink with audacity the way of our presence in these lands following the footsteps of Claret, on foot, on horseback, by car, by boat and by train. Paradoxically, Claret’s main reason for not accepting the appointment of Archbishop of Santiago de Cuba – “my spirit is for the whole world” – was and remains the key to understand his life and ours.