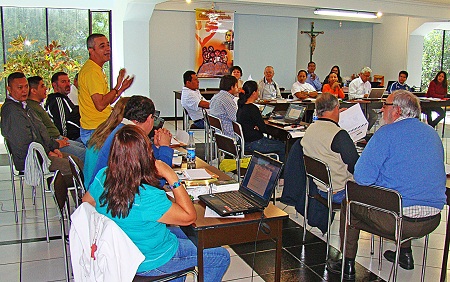 Buenos Aires, Argentina.Beginning with the Pastoral Biblical Encounter of CICLA held in August 2010 in Quito (Ecuador), and with the approval of the Prefects of the Apostolate of CICLA meeting in Panama in April 2011, the General Assembly of CICLA (Confederation of Claretians of Latin America), in May of 2011 in Peru have decided on various projects of the Biblical Apostolate.

The first project consists in putting together the CICLA Biblical Ministry animation team; the second, the development of lines of action which will animate and support the journey of these Organisms based on the Word.
The team has been made-up of the following: Jaime Michea (Chile-San José del Sur), Guillermina Castillo (Panamá-Central América), Adriana Mora (Colombia West), José Enrique Aponte, CMF (Colombia East and Ecuador), Antonio Ferreira, CMF (Brazil), Marisela Riera (Argentina-San José del Sur) and José Vidal, CMF (El Salvador-Central América) who is the team coordinator. The immediate contact person with CICLA is the executive secretary: Alejandro Quezada, CMF.
The fundamental lines of the Biblical Project for CICLA are:
To make possible the extending of a network of the experiences and animation processes of the CICLA biblical ministry, favoring:
• A biblical animation of the ministry based on popular and communitarian reading of the Word which lives, celebrates, and exercises a listening of the voice of God from the texts and the reality of life in the shared mission.
• The sharing of the biblical journey which allows for socialization and knowledge based on the experience of each region.
• The building of an identity of the Claretian biblical journey and its own hermeneutic which includes specific hermeneutics.
• The mission of carrying the Word and making it known.
• Strategies and mechanisms of communication, dialogue, and help with other provinces and ministries.
• Interchange of material among Claretian Organisms.
• Building of new spaces of formation and/or the utilization of spaces of formation now programmed by the different Organisms and those which are able to integrate other experiences.
• Systemization of the biblical processes of the Organisms.

For the most recent postings on their most latest works, ReBiClar shares its developing web site: www.rebiclar.net, developed with great professionalism, passion, missionary vision together with Diego Haristoy, coordinator of Claretian Publications and Communications of San José del Sur, and in its beginnings, with Diego Magrin of the Province of Brazil.