XVI General Assembly of the Missionary Sisters of the Claretian Institution 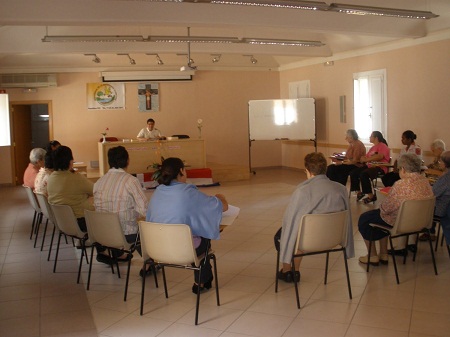 Vic, Spain. The Missionary Sisters of the Claretian Institution gathered for their XVI General Assembly in Vic on July 17th.This Institute, which forms part of the Claretian Family, was founded by Fr. Lluís Pujol, CMF and Sr. M. Dolors Solà to live the missionary spirit of Jesus according to the spirit of St. Anthony Mary Claret. They carry out their evangelizing mission by all means possible, among them: education, health, catechesis, and advocacy for women.

In the letter convening the Assembly, Sr. Pilar Rovira, Superior General, addressed the theme: spirituality in communion”. It is an important time that offers all the sisters the possibility to participate on points of action which will animate their religious and missionary life for the following years.

The sister delegates come from the communities of Lambaré and Yhú in Paraguay, from Altamira in the Dominican Republic, and from Cornellá and Vic, in Spain.

In January 2010 they began the initial period of preparation through a preparatory committee to bring forth a work document, the election of delegates, the completion of reports and evaluations, and especially, reflection and prayer with the Word of God and their institutional and ecclesial documents.

The General Assembly can be followed at: http://asambleamic.blogspot.com